Suddenly, all the hype of a mega party in readiness for the 2011 Nigerian general elections has simmered down. And what appears left as a strong opposition to the ruling Peoples Democratic Party, PDP is to me, the PDP itself. This was how a legal practitioner, and Action Congress (AC) candidate in the 2007 elections  into the Rivers State House of Assembly, Amglad Imabibo captured the myth of a strong opposition  political party.

In fact, anytime soon, more armour bearers of his kind within AC in the state would defect to the PDP and publicly burn their brooms, a symbol of the party intended to sweep away all the political wrongs the party once believed, the PDP has inflicted on the Nigerian state.

Such defections have been common place, the latest being five members of the House of Representatives from Zamfara State, elected on the  All Nigerian Peoples Party (ANPP) platform. Speaker of the House, Dimeji Bankole who read their joint letter to the House, last Thursday also listed the political thorn-coats as Abubakar Shehu Gumi, Mohammed Sani Takuri, Idris Mohammed Kanta, Bello Abubakar and Zubair Dahiru.

Together they bid their former party farewell but retained their seats in the House, a classic case of a kid eating his candy and still having it. Ironically that happened shortly before the lower Chamber of the National Assembly was to address the vexed issue of carpet crossing and the penalties that such must attract.

Earlier same day, the Senate had passed 36 amendments, one of which was that in respect of section 109(1) of the 1999 Constitution which states;  “A member of the House of Assembly shall vacate his seat in the House if- (G) being a person whose election to the House of Assembly was sponsored by a political party, he becomes a member of another political party before the expiration of the periods for which that House was elected”.

Strangely, the Senate voted in favour of expunging this welcome check, the aspect of losing the assembly seat if such law maker defects to a party other than that on which platform he was elected. The implication is that the much expected institutional , structural and legal frame work needed to build and sustain multi party democracy, grounded in diverse ideological and  interllectual inter-play as operates in other well planned political cultures, might have been dashed. Dashed, if after the likely harmonisation between the two chambers of the National Assembly, the amendments are sent to the various state Assemblies for support and eventual passage.

How can a pro-active Senate of the kind Nigerians have come to behold as nationalistic ignore a legal loophole that is likely to encourage the production of political thorn-coats, men and women with same principles and ideologies? Yes, many have said that Nigerian political parties lack clearly definable ideologies as can easily be discerned of the American type democracy, which model we have adopted, but part of the necessary checks should have been to provide conditions that would discourage political adventures and inconsistencies with little or no regard for the hopes and tears of the electorate.

Why, for instance, must one, elected into the ruling party defect to the opposition and still retain his seat in the state House. It was to check such avoidable political harlotry that the framers of the 1999 Constitution conceived section 109(1)-G which insists that none should eat his political cake and have it.

But with the senate decision going the way it went, the only hope left is to pray that the House of Representatives stands by its position that the offending section against carpet crossing be retained, as the House considers report of its 45-member committee  tomorrow, Tuesday, March 30, 2010. But we can only pray.

Presenting its report, at plenary last Thursday, the Committee chairman and Deputy Speaker, Hon Usman Nafada, gave Nigerians a reason to hope when, he said the committee proposed the alteration of various sections namely 68, 135,180 and indeed the now contentious section 109, which seeks to make carpet crossing illegal.

It also recommended that “where a person elected as an independent candidate, he becomes a member of a political party before expiration of the period of which that House was elected, he will vacate his seat”.

With the opportunity offered by ungoing talks and debates concerning the production of a constitution that would reflect the opinions and wishes of the majority of the people, one expects the National Assembly to do everything that will encourage stability of democratic institutions, key among which should be a vibrant opposition that will offer alternative views on burning national issues. That without doubt, is a necessary step towards checking the now familiar defections which will someday, make nonsense of the multi-party system that has been on test-drive for far too long.

Even now, there is a strong fear in the air, and many Nigerians have sensed the danger of brewing a one party state with the only opposition party being the ruling party itself. That scenario can only prove right, views of the Ist Earl of Beaconsfield who once warned, ‘No Government can be long secure without a formidable opposition’

I believe so, because history has proved that the world owes her heritage in science and technology not to those who agreed all the time but those who disagreed and kept urging on.

A formidable opposition is one that is alert and readily proves that it could be done better and differently and persuade others to try fresh ideas, surely, not the greedy cash and carry lot, Nigeria has paraded recently. A click of arm-chair critics driven most times by greed and selfishness and not the need to wrest power for the purpose and conviction of doing any better but amassing more.

But with the way things are going, with Senate watering the dry land for later-day carpet crossing with many more defecting from their parties not to the myth, that is the mega party but straight to the ruling PDP,  there’s no picturing the face of Nigerian democracy beyond the 2011 elections. A one party state, is to put it mildly.

My Agony is that only defections from the ruling PDP ( and the few, even insignificant) to any other party attracts sanctions, as in Edo and not from others into African’s largest political party.

Now, therefore, is the time for all well-meaning Nigerians to defend those structures that could encourage diverse views and discourage the steady slide, deep into a single one. But that’s how far we ‘ve gone and where we are going. 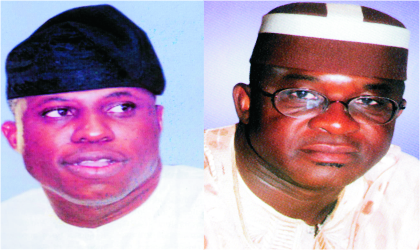