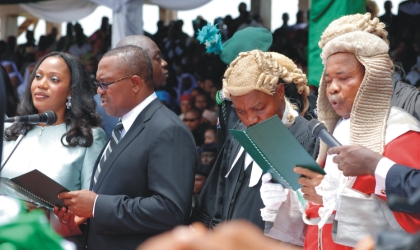 Anambra State Governor, Peter Obi (2nd left) being administering Oath of Office by the state Chief Judge , Justice Paul Obidigwe (right), in Awka on Wednesday. With him is his wife, Margaret. Photo: NAN

Nigeria’s Acting President will nominate a new ministerial team by early next week, and is likely to re-appoint around half the cabinet he has just sacked, presidency sources said on Thursday.

Fast appointment of the ministers could do more to alleviate uncertainty after Jonathan dismissed the entire cabinet on Wednesday, aiming to consolidate his authority a month after assuming executive powers.

“ Twenty of the ministers will certainly come back, ‘one of the presidency sources said on condition of anonymity, adding that he expected Jonathan to sent his list to the Senate for approval by Tuesday.

Former Minister of State for  Petroleum, Odein Ajumogobia was likely to be the new oil minister, while out-going defence minister, Godwin Abbe, who has overseen an amnesty programme in the Niger Delta would be re-appointed, the source said.

In Abuja, Jonathan’s spokesman, Ima Niboro told reporters that, ‘ the cabinet dissolution is a bid to inject fresh blood and bring in greater vigour to governance”. However, he declined to comment further.

“Choosing a new cabinet which retains a large number of ministers suggests that Nigeria’s broad policy direction is unlikely to change and could let Jonathan push ahead more authoritatively with his agenda in the 14 months left of this presidential term.

Jonathan assumed executive powers in early February to try to end government paralysis in the absence of President Umaru Yar’Adua who had been in a clinic in Saudi Arabia receiving treatment for a heart condition for more than two months.

Yar’Adua has since returned but remains too sick to govern or even speak to Jonathan.

Presidency sources say he is still in a mobile intensive care unit and Jonathan’s consolidation of power reinforces the view that he is unlikely to return.

But the Acting President’s public statements have shown a will to accelerate, not depart from the polices of Yar’Adua, with electoral reform, fighting corruption, restoring power and reviving the  Niger Delta amnesty his top priorities.

Violence in Plateau State has claimed hundreds of lives this year, while militants in the Niger Delta detonated car bombs this week and have threatened more attacks.

The Movement for the Emancipation of the Niger Delta (MEND), which planted the bombs in Warri said the sacking of the cabinet in itself changed nothing.

“Unfortunately, the only sign of goodwill, we will consider is when the issues of resource control are announced to be debated in the Senate or implemented in a constitutional amendment’, it said in an e-mail to Reuters.

The speed with which Jonathan wins approval for the choice of new ministers will be a key test of his political backing.

There is a broad consensus on the need for reforms and lawmakers are unlikely to want to be seen to be undermining progress. But other issues could prove more divisive.

The presidency source said former information minister, Dora Akunyili the only member of the cabinet to criticise those around Yar’Adua openly for the handling of his absence, would be nominated for minister for the Federal Capital Territory.

Akunyili’s criticism of Yar’Adua’s inner circle for their efforts to cling to power won her public support but also power enemies.

Some lawmakers may need some persuading if  her return to government is to be approved.

The current presidential term ends in May next year and the reforms could bring elections forward to next January, giving Jonathan a short time to push ahead of his agenda.

Jonathan And The New Cabinet