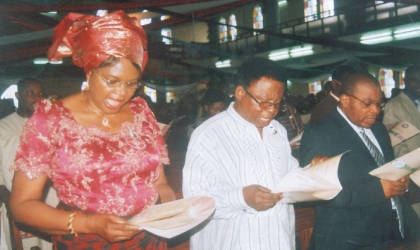 Mr Joe Mukoro of Monier Construction Company ( MCC), a Port Harcourt based contracting firm stated this yesterday after participating in the public opening of bids for the construction of new staff housing quarters for Government House, Port Harcourt.

Mr Mukoro said the public opening of the bid documents in the presence of all the 36 Contractors who tendered for the jobs, was transparent and novel, adding that the process should be extended to other agencies of government handling contract awards as well.

“On behalf of all the contractors here, I can say rightly that we are satisfied, and it should not stop here”, he said.

Also speaking, a practicing journalist in the state, Mr Terver Akese of the Federal Radio Corporation of Nigeria, FRCN, who spoke on behalf of Journalists who witnessed the bid opening process, said the exercise was transparent, and open, as journalists were allowed to watch the entire process unhindered.

Mr. Oguru explained that the motive was to make the process as transparent as possible, so as to bring about the best attitude towards contract awards, and to set the pace for other agencies of Government to emulate.

The Permanent Secretary noted that it was the desire of government to provide a befitting accommodation for Government House staff who perform essential services, therefore the Governor authorized the construction of a new staff quarters.

He said the responses to the advertisement to bid for the project was impressive, as the Government House Tenders Board had complied with the Due Process requirement, and thanked the intending contractors for attending the public bidding exercise.

About 36 companies participated in the pre-qualification bid for the construction of new Staff Quarters of Government House, which had the Secretary of the State Tenders Board, Barrister Nicholas Ohochukwu in attendance as well.