For the second time Rivers people were treated to a colourful and electrifying street parade of different cultural and social groups that took part in the on-going Rivers Carnvial (CARNIRIV), yesterday.

The exercise which kicked-off at about 10.00am from the Airforce base saw the State Chief Executive, Rt. Hon. Chibuike Amaechi leading a train of over 300 participating floats which included banks and non-governmental groups.

By 11.00am the procession had reached fever pitch level with several displays seizing junctons at Rumuola, Garrison, Waterlines, Lagos Bustop to the Civic Centre.

The floats were designed in different forms depicting the major resources and cultural activities unique to each of the local government areas as participants and cultural groups waved excitedly to the mammoth crowd that came out to watch them.

As each group approached the Garrison junction, they were asked to move in union following the presence of judges at selected junctions to assess them.

To ensure that the exercise was crime free, armed policemen and soldiers were located at different parts of the carnival route with a few patrolling to keep the crowed at bay. But the spectators surged into the expressway swinging to the different beats that came their way.

Some of them who spoke to The Weekend Tide said the atmosphere was a sign that peace has returned to the state.

A man who gave his name as Hon. Marcus Nemi said the CARNIRIV has again given the people of the state a new hope for reunification despite the crisis that rocked the different parts in the past.

Commending the state government for declaring yesterday as work free day, Hon. Nemi declared, “The event is a good source of exercise. People who don’t regularly exercise their body should use today to do that.”

For Eso Brown, “It wasn’t like this before and I think ours is different from the Calabar Carnival.”

The lady decried that the past leaders in Rivers State failed to promote such an event hence lauded the Governor Chibuike Amaechi government for being innovative.

A participant who gave his name as Alhaji Suleiman said the event is a good way of attracting international investors and tourists.” This can attract people and when they come and see things like this they would like to invest,” he added.

The CARNIRIV is expected to end on Sunday with a thanksgiving. However, tomorrow a Galanite has been billed to take place at the Polo Club with international and local artistes including Bennie Man entertaining the people. 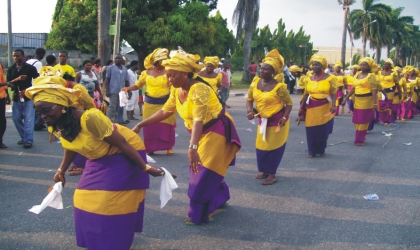