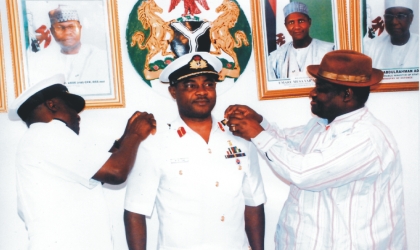 About 15 per cent of the national income is lost to fraudsters, the Institute for Fraud Management and Control (IFMC), has said.

The loss covers approximately 15 per cent of earnings and capital from business and corporate entities, it further said.

President of IFMC, Mr Isidore Nwankwo made public the figure while presenting a paper titled, “Why Do People Commit Crime?”, at a merit and excellence award to the new Rivers State University of Education on Wednesday in Port Harcourt.

Mr Nwankwo remarked that tendencies towards fraud have risen in the city because of greed, economic stress and behavioural stimulus, arguing that despite the presence of anti-graft and other fraud regulating bodies fraud has continued to be on the rise in the country.

The fraud expert contended that since it is difficult to absolutely understand why human beings behave the way they do, managers need to conduct behavioural analysis of workers under them to prevent fraud.

He however identified major causes of fraud in Nigeria as stemming from what he called “social learning”, as a result of learned behaviour.

He also advised the citizenry to curtail the quest for material things, personal debts and other behaviour that would make them become prone to fall to the temptation of committing fraud.

The IFMC boss commended the Rivers State University of Education for creating a culture that works in preventing fraud within its system saying that policy is responsible for the award it received from the body.

In her remarks, Acting Vice Chancellor, Prof Rosemund Osuoghulu lauded the IFMC for recognizing the institution, while expressing the hope that more awards are underway for the newly established university.

She pledged that the university would continue to refine its system by checking practices assuring that erring staffers would be punished as well.

Meanwhile, the Rivers State University of Education has bagged a merit and excellence award for being a fraud free tertiary institution in the country.

The award was given by the Institute for Fraud Management and Control in conjunction with the Federal Ministry of Education after the body conducted a study of the various tertiary institutions of the country.

President and chairman of the Governing Council of IFMC, Isidore Nwankwo while presenting the award to the school on Wednesday said the award was given following various assessment methods adopted by an independent consultant.

Mr Nwankwo who commended the institution for its excellence management of human and material resources observed that the criteria adopted covers all spheres of the educational sector.

In the view of Mr Nwankwo the award, “is a call for higher responsibility and the fight against corrupt practices in our high institutions.”

Receiving the award unbehalf of the RSUOE, the acting Vice Chancellor, Prof Rosemund Osa-Oghulu expressed delight over the gesture demonstrated by the body.

In her words, “we are highly elated that the little we are doing here is being appreciated. We promise that this university be first among its equals.”

Henceforth, she assured that the new university would do all it can to maintain high standards in both academic and personal activities as a way of maintaining its position.

She further stated that the award is a good indication for a brighter future for the institution and the state in general.