A bank manager with the First City Monument Bank (FCMB) and two others including a policeman were last week nabbed by men of the National Security and Civil Defence Corps in Port Harcourt for engaging in bunkering activities.

The bank chief and the suspects were nabbed following a tip-off by suspecting members of the public. It was after the tip-off the NSCDS officials started to monitor the activities of the bank.

On daily basis, a motor load of diesel would be ferried from an unknown destination into the bank premises through police cover.

However, luck ran out of the suspects when officers of NSCDC finally swooped on them to discover drums of diesel inside the bank premises located at GRA junction along Aba Road in Port Harcourt.

Eyewitnesses informed The Tide On Sunday that fight broke out between men of NSCDC and policemen securing the bank premises. The policemen were said to have seriously resisted the arrest of the suspects.

Worried over the development, the NSCDC had to put a call to the state Police Commissioner, who immediately ordered the DPO at Olu-Obasanjo Police Station to draft his men to the scene to avert problem.

The reliable source informed The Tide On Sunday that irked by the activities of its men, the police were said to have detained some of the policemen.

The main suspect, one Friday Salifu from Kogi state was detained by the NSCDC for interrogation.

Confirming the incident to The Tide On Sunday, Public Relations Officer of Nigeria Security and Civil Defence Corps in the state, John Olubuah confirmed that the petroleum product was siphoned from vandalized pipelines.

Olubuah  said, “when we got the product, we went for a special test and confirmed that it was not from the filling station.”

The NSCDC spokesman stated that the suspects went as far as forging papers from Conoil, which they said were the sellers of the product.

He disclosed that about 12 jerry cans of diesel and other petroleum products were recovered from the bank premises, while expressing surprise why a bank should be used for such illegal business.

Olubuah declared that the bank manager has been invited for questioning and that he was yet to report to the station, but assured that Mr Salifu would be prosecuted immediately when the agency concludes investigation into the matter. 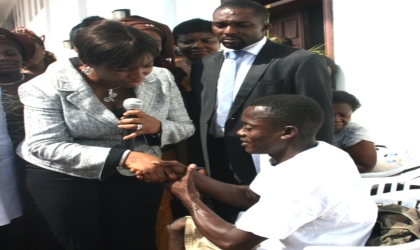 Wife of Rivers State Governor Judith Amaechi exchanging pleasantries with a physically challenged person, during the International Day for People with Disability in Port Harcourt.

Group Calls For Prayers For Yar’Adua