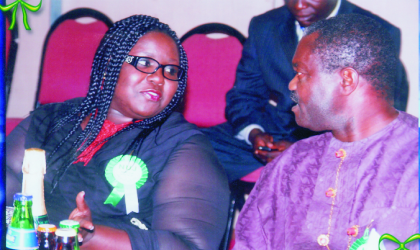 Representative of the Governor of Rivers State and Commissioner for Information and Communication, Mrs Semenitari Ibim (left), explaining a point to chairman of the occasion, Senator, Dr, Ben Birabi, during the Buffet/Award Night to climax the Nigeria Union of Journalists, Rivers State Council, 2009 Press Week, at Hotel Presidential, Port Harcourt, last Friday.

Worried about a festering leadership crisis rocking the Nigerian Bar Association (NBA), past presidents and elders of the 50-year old association have fixed an emergency meeting with the warring factions in Lagos tomorrow to resolve the crisis.

Those expected at the meeting include past presidents, Chief Wole Olanipekun (SAN), Onueze Okocha (SON), Thompson Okpodo (SAN), Olisa Agbakoba (SAN) and Lanke Odogiyan, among several others. Even so, there are fears that it may turn out to be a tension-soaked forum, as the combatants in the crisis-ridden association are poised for a showdown following an impeachment notice served on the General Secretary, Mr Ibrahim Eddy Mark, over allegations of financial impropriety.

Mark’s alleged misappropriation of funds was coming two months after a splinter group within the NBA asked its National Executive Committee (NEC), the association’s highest ruling body, to sack its President, Mr Oluwarotimi Akeredolu (SAN), over allegations of corruption, abuse of office and “acts unbecoming of the NBA President.”

Apparently determined to prove the allegations against Akeredolu, the group, led by the NBA third Vice-President, Mr Barth Okoye-Aniche, wants the president to step aside pending the outcome of a petition before the NEC.

But barely two weeks after Okoye-Aniche’s allegations against Akeredolu got the sympathy of some lawyers, the NBA through its Publicity Secretary, Muritala AbdulRasheed, served an impeachment notice on Mark.

This latest move by the association yesterday deepened the crisis, as it sparked off another round of accusation and counter-accusation.

The NBA’s spokesman has in a strange twist of events accused the general secretary of acting the script of the Justice Minister and Attorney-General of the Federation, Chief Michael Aondoakaa (SAN), who AbdulRasheed described as the unseen hands in the crisis rocking the group.

The group accused Mark of receiving $50,000 (about N10 million) to destabilize the NBA.

In the impeachment notice, entitled “The Case Against Ibrahim Eddy Mark”, the general-secretary, the association had accused the general secretary of “accompanying the federal Attorney-General to Geneva in the name of NBA without lawful authority.”

It added: That at the officers’ courtesy call on the Federal Attorney-General/Minister of Justice, Michael Kaase Aondoakaa, SAN, on July 6, this year, the federal Attorney-General graciously invited the president of the NBA to accompany him to Geneva, Switzerland, for the purpose of presenting Nigeria’s Action Plan on Human Rights to the United Nations on July 20, 2009, an offer Akeredolu turned down.

The spokesman alleged that the current insubordination of the scribe to the NBA President and the Constitution was hatched on the Geneva trip with $50,000.00 (Fifty thousand Dollars) allegedly received by the scribe.

Upon return from Geneva, on or about the August 1, 2009, he further alleged, General Secretary caused to be published in several Nigerian newspapers, … a statement dismissing NBA President Oluwarotimi Akeredolu (SAN)’s statement concerning the Lagos Local Government Development Centre debacle, issued in the name of the NBA.

“In the light of the above, it is our desire that the General Secretary, Ibrahim Eddy Mark be removed without further delay,” the spokesman said.

But in a swift reaction, a livid Mark described his planned removal as a ruse and the joke of the year, saying he committed no impeachable offences.

Instead, he challenged his accusers to be bold enough to counter his accountability and transparency in the discharge of his duty as the association’s general secretary.