The police in Abuja have arrested a man suspected to have murdered a lecturer at the Nnamdi Azikiwe University, Awka, Anambra State, Prof. Ifeoma Okoli, and her daughter, Jewel.

The suspect, Wisdom Onyekwa, alias Wissy, while being paraded by the Police yesterday in Abuja, said, “please forgive me. I know I have sinned before God and man. I am now a changed person. I swear, I will never kill again.”

Okoli and her daughter were murdered in her house in Awka on Saturday January 24, this year. Efforts by the police to unravel the mystery behind the murder seemed impossible, hence, the call on security operatives by some individuals and corporate organisations both local and international, to ensure that the killers were brought to book.

Inspector General of Police (IGP), Ogbonna Onovo, had promised to fish out the killers. Police efforts paid off, as Onyekwa, was arrested on October 17, this year, in his village, Amunda, Rivers State. Parading the killer yesterday before journalists at the Force Headquarters, Abuja, Onovo, represented by the Deputy Inspector General of Police (DIG), Investigations, Mr. Israel Ajao, said after Wisdom had hit the lecturer with iron rod several times until she died, he descended on her seven-year old daughter, Jewel, and raped her to death.

According to him, between January 20 and 21, this year, the deceased contacted three young men, Wisdom Onyekwa, Michael Madu, and Goodnews Ikechukwu, to carry out menial job for her in her new house at Udoka Housing Estate, Awka. They were to move sand from the front of the house into the compound. Onovo said “on Saturday January 24, this year, Wisdom Onyekwa went back to the house, but this time around, not for the menial job.

Instead, he killed the woman with iron rod, raped and strangulated her seven-year old daughter, who walked into her mother’s room when she heard her scream, took away N10,000, the deceased two GSM phones, and fled.

“At about 12 noon on the fateful day, one Ebele, a neighbour, who observed that the labourer, whom she had seen working in the house, had suddenly disappeared without completing the job and left the main gate wide open, entered the deceased’s apartment to find out what was going on, but could not gain entry as the doors were firmly locked.

Suspecting foul play, she drew the attention of another neighbour and a cousin to the deceased, Dr. Eric Anazodo, who ran into the compound and gained access to the house by using a spare key to open the door already locked by the fleeing suspect. On opening the door to the sitting room, the lifeless body of Jewel was found lying on the floor, while that of her mother was found in the bedroom, with her head battered with iron bar.”

He said in the course of investigation, statements volunteered by the deceased’s relations provided necessary information that assisted the detectives and also the data call of the deceased’s GSM line after her death, provided by the network provider, was very helpful, as it revealed a great deal of information about other GSM numbers that were getting in touch with her stolen line. 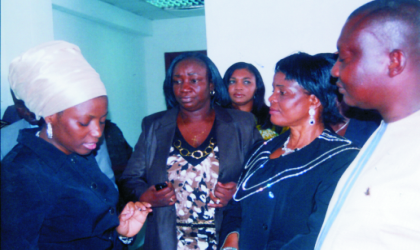 Wife of Rivers State Governor, Dame Judith Amaechi interacting with some female child rights activitsts during a visit to the State House of Assembly. With them is the Deputy Speaker, Hon Dumnamene Dekor (right).