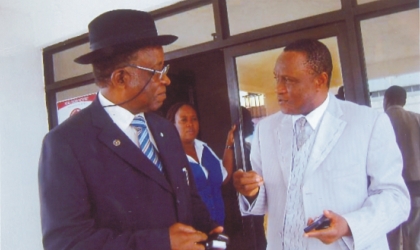 The Governor of the Central Bank of Nigeria, Mallam Sanusi Lamido Sanusi, has stated that the recent shake-up of the nation’s banking industry was a bold move by the apex bank to save the entire sector from collapse.

Sanusi added, however, that the shake-up was not indicative of any crisis in the sector.

The apex bank governor, who stated this while delivering a paper in Lagos, Friday night, at the 2009 Annual Bankers’ Dinner, organised by the Chartered Institute of Bankers of Nigeria, noted that no bank had defaulted in its obligation to its customers, adding that if the apex bank had not waded in at the time it did, there would have been crisis in that sector by now.

“I can authoritatively tell you that there is no crisis in the nation’s banks, since all of them are still performing their obligations to their different customers. But it is the CEOs of some of these banks and some borrowers, that are in crisis.

According to him, the seven per cent growth recorded in the last two quarters, despite the credit squeeze and the global economic downturns at the periods under review, showed that the nation’s economy could go on without the banks, stressing that “it simply means the growth of bank credit to the private sector recorded in the last two years were fake.”

The banks, he stated, were not lending to the real sector, adding that the greatest challenge was getting the banks to perform their statutory function to the banking public.

He restated the apex bank’s determination to ensure that no bank failed in Nigeria, since the failure of one bank, he stated, could lead to collapse of the entire banking system.

One of the ways, he stated, the apex bank would ensure this, was by continuously “intruding” on the privacy of these banks to ascertain their state of health.

While defending his N620 billion bailout to some of the banks recently, Sanusi stated that the action was informed by the fact that the failure of a big bank could make other banks to go under, since it would have eroded the confidence of the banking public.

He stated that the current sanitisation exercise going on in the sector would not be limited to the operators in the industry alone, adding that regulators would also be held accountable where necessary.

He, however, noted that the reforms had been able to revive shareholders activism; since shareholders’ are now, more than ever before, eager to know how their investments were being spent.”