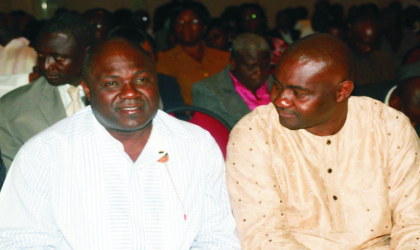 The Rivers State Government has re-assured militants in the state, who are yet to embrace the Federal Government’s Amnesty programme, of their safety if they surrender weapons in their possession.

Governor Chibuike Rotimi Amaechi, who gave this assurance Wednesday during a, maiden monthly press briefing at Government House, Port Harcourt, said Ateke Tom, Farah and other militants in the state would be free to walk the streets if they utilised the amnesty opportunity to surrender their arms.

The governor explained that the Federal Government’s amnesty programme was a huge success in the state, noting that those who repented and handed over their weapons would not be hunted by security agencies, but reminded them that the amnesty period has October 4,  as its expiry date.

He recalled that  Rivers State was the first state to initiate a rehabilitation camp for repentant militants, who are now being trained in various skills, and announce that the first batch of 300 persons would soon be graduating after undergoing training within and outside the state.

The governor remarked that the State Executive Council, as well as the Elders Council had consented to the demolition plan, emphasising that the government had paid N4billion compensation for residents of  Njemanze street waterfront to enable them have alternative homes.

According to him, the government has carried out enumeration of houses in the affected  areas, assuring that the demolition would be done in phases while  the waterfronts would be transformed in line with government’s urban renewal programme.

Commenting on the flooding in Port Harcourt, Governor Amaechi said, in spite of the heavy rains this year, the major problem is that some property developers has built on water channels which blocked the water ways causing overflow of storm water.

He disclosed that some of those houses blocking the channels would be demolished to allow for free flow of water, and warned those affected not to blame government if their structures are touched.

Regrettably, the governor said some residents of Port Harcourt and its environs have turned the drains to dump sites, and blamed refuse disposal contractors for not living up to expectation.

Amaechi us the  opportunity to explain that the state government is building three waste management plants in the state to handle wastes, including solid wastes, pointing out that on completion of the plants the refuse disposal contractors would be revoked to give room to house the refuse collection system.