Nigeria’s oil production which fell to about 1.3 million barrels per day recently due to attacks by Niger Delta militants has risen to about 1.7 million bpd, Petroleum Minister Rilwanu Lukman said Wednesday.

“At the height of militant activities, the production dropped to about 1.3 million bpd and as I am talking to you now, we are doing about 1.7 million barrels of crude and 700,000 barrels of condensate,” Lukman told reporters.

“Things are happening. Things are getting better. We hope it will even get better,” Lukman said after a weekly cabinet meeting, presided by President Umaru Yar’Adua.

Militant activities in the oil-rich region — charcaterised by kidnappings of mostly foreign oil workers and sabotage of oil installations — have adversely affected the operation of the oil companies leading to a substantial reduction in oil production.

Nigeria ranked eighth among the global oil cartel, the Organisation of Petroleum Exporting Countries (OPEC), and is still struggling to regain its position as Africa’s leading oil producer having been overtaken by Angola.

Nigeria began implementing an amnesty deal for all militants in the Niger Delta on August 6 in an effort to end crippling attacks on the oil industry and revive the country’s battered crude production.

Militants were expected to turn in their weapons at the nearest screening centre, take an “oath of renunciation, and receive the presidential amnesty and unconditional pardon”, officials said,

The amnesty expires on October 4.

Faced with continuing attacks on oil personnel and infrastructure in the Delta, Yar’Adua had announced the amnesty on June 25.

In response, the Movement for the Emancipation of the Niger Delta (MEND), the region’s most prominent and sophisticated rebel group, which claims to be fighting for a larger share of the oil revenues for the impoverished Niger Delta communities, last month declared a 60-day ceasefire.

The ceasefire will be in force till September 15. 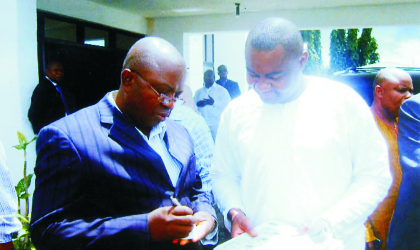