The Bird Flu (HINI) virus has killed more than 700 people worldwide since emerging in April, and countries could consider closing schools to slow its spread, the World Health Organisation (WHO) said recently.

The WHO, whose previous death toll was 429 two weeks ago, also said it was up to national health authorities to decide what measures they impose to slow the spread of the new strain.

British researchers writing in the journal, Lancet Infectious Diseases, said on Monday that governments needed to draft plans for when to close schools if the swine flu pandemic worsens.

“School closure is one of the mitigation measures that could be considered by countries,” WHO spokeswoman, Alphaluck Bhatiasevi told a news briefing.

As WHO has been saying, different countries would be facing the pandemic at different levels at different times. So it is really up to countries to consider what mitigation measures suit them in regard to the situation in individual

The U.N. agency, which declared an HINI influenza pandemic on June II, said last week it was the fastest-moving pandemic ever and now pointless to count every case.

It told countries to stop reporting individual cases and concentrate on mitigation measures and detecting any unusual patterns of disease or spike in rates of absenteeism.

Some 125,000 laboratory-confirmed cases have been reported worldwide as yesterday Bhatiasevi told our source.

A network of independent experts is doing mathematical modeling studies to project what kind of cost-effective and beneficial mitigation measures countries can implement, according to the spokeswoman.

The WHO is coordinating the group, composed of mathematicians, epidemiologists and virologists, she said.

The new flu strain can be treated by antivirals such as Roche Holding’s Tamiflu or GlaxoSmithKline’s Relenza, but many patients recover without medical treatment.

Flu experts say at least I million people are infected in the United States alone. 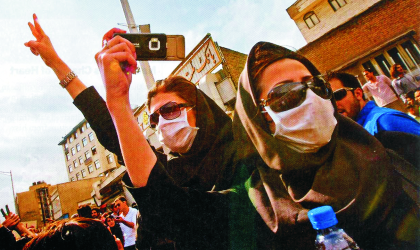 Four months after it emerged, a clear-cut solution to the Bird Flu virus remains a mirage, save mitigation measures such as this, adopted by these Asian youths.