Baring any last minute change by the Nigeria Premier League Board, NPL, the 2009/2010 Globacom Premier League season will commence on the 30th of next month across the country.

This is an attempt to harmonise the local league calendar with that of European top leagues to end the usual disruption of club’s plans by players who usually embark on European trials when the local league was still running and Europe observing off season.

The NPL, which had its annual general meeting AGM in Makurdi, yesterday was expected to have endorsed the kick-off date.

Bayelsa United FC of Yenagoa, emerged the winner of the last season, which ended on June 14, 2009. It was the first time the club was winning a national trophy.

They would now represent the country in the CAF Champions League, alongside Heartland of Owerri, second place finishers.

Enyimba International FC of Aba, winner of the Federation Cup flies the country’s flag in the CAF Confederation Cup.

Meanwhile, there is still cloud over which of Sharks FC and Warri Wolves, runner up in the Federal Cup and fourth team in the league, respectively, that will be Nigeria’s second confederation cup representatives.

While the Niger Football Federation, NFF recently announced Warri Wolves, many believe that Sharks are the rightful candidate and should be given the ticket.

The new league season will however see four new teams, Dolphins, 3SC, Kwara United and Ranchers Bees, the promoted teams back in elite action, while the relegated four , Nasarawa United, FC Abuja, Akwa United and JUTH FC replaced them in the national Division One Pro-League. 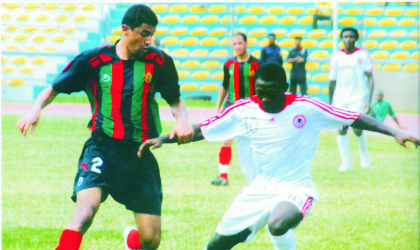 Heartland striker, John Owoeri in action against FAR of Morocco, during a Champions League match in Owerri.