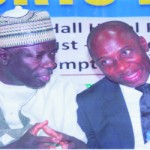 Twelve years after their conviction, former Chief of General Staff, Lt. General Oladipo Diya, and 44 other military officers, convicted for their alleged roles in the phantom coups in the General Sani Abacha administration in 1995 and 1997, finally got presidential pardon yesterday. This followed the recommendation of the Presidential Advisory Committee on Prerogative of Mercy (PACPM), which was approved by President Umaru Musa Yar’Adua and was considered for final reprieve yesterday by the National Council of State meeting scheduled in Abuja. Others to be granted the presidential pardon and compensation include: Major Generals Abdulkareem K. Adisa (deceased) Tajudeen Olarewaju, Col. Lawan Gwadabe, 41 Other officers, four other ranks, a current serving Senator Chris Anyanwu, the late Dr. Beko Ransome-Kuti and a journalist, the late Bagauda Kalto, former special adviser to the Chief of General Staff, Professor Odekunle, an activist, Comrade Shehu Sani and two State Security Service operatives, namely, Anthony Awoloyi and Julius Badejo. In a document,dated 23rd June 2009, copies of which have been given to state governors, former Heads of State, Senate president and speaker of the House of Representatives, President Yar’Adua has accepted to grant the former convicts presidential pardon in accordance with the provisions of 175 of the 1999 Constitution. The document prepared to apprise the National Council of State of the intention of President Yar’Adua to grant the ex-convicts presidential pardon is categorised into four different groups for which the first set included 68 persons convicted by the Abacha administration for alleged participation in the 1995 and 1997 phantom coup d’état, but most of whom are no longer in detention and were earlier granted clemency. The presidential document further stated that those in the first category, include those earlier granted clemency, but not full pardon thus their properties were still forfeited, while category two contained list of 87 persons who are 60 years and above serving various terms in prisons all over the country. Category three include 12 eligible serving prisoners convicted of federal offences. The fourth category comprised 2 persons, namely the former Managing Director of Bank of the North (BoN), Alhaji Shettima Mohammed Bulama and Dr. Chiichii Ashwe, who were convicted for contravening financial laws but crave for the removal of the stigma attached to their names for purposes of re-integration into the society. In the recommendation of the presidential pardon to the Council of State, following the advice of the Presidential Advisory Committee on Prerogative of Mercy (PACPM) for 2009, the debilitating ill-health likely to incapacitate or terminate in death of the inmates, as well as young persons of 16 years and below and all those that have spent 15 years and above on life sentence, were part of the consideration for the presidential pardon. The list of other military officers granted the presidential pardon include; Colonels G. A. Ajayi, O. Oloruntoba, R. S. B. Bello-Fadile, R. N. Emokpae, J. Isa, Olu Craig, E. I. Jando, D. Ndubueze and Y. Bako, while those in the Lt. Col. group include K. H. Bulus, S. E. Oyewole, M. A. Igwe, R. K. Obiki, C. P. Izeogu, O. L. Nyong, V. O. Bamgboye and S. B. Mepaiyeda. Others are A. Lawal, M. A. Ajayi. G. P. Okiki, O. O. Akiode (deceased), Navy Cdr, D. A. Omessa, L. M. Fabiyi, Majors J. O. Edeh, E. Obalisa, N. U. Okoro, A. Umar, A. A. Akinyemi, O. O. Fadipe, B. Mohammed, Capt. A. A. Ogunsuyi, U.S.A. Suleiman, M. A. Ibrahim, Lt. Olowookere (Navy), Lt. D. K. Olowomoran, 2nd Lt. R. Emouhe, Sgts. M. Potiskum, and P. Usikpeko (deceased) as well as Cpl. Godspower Ogbinovia.