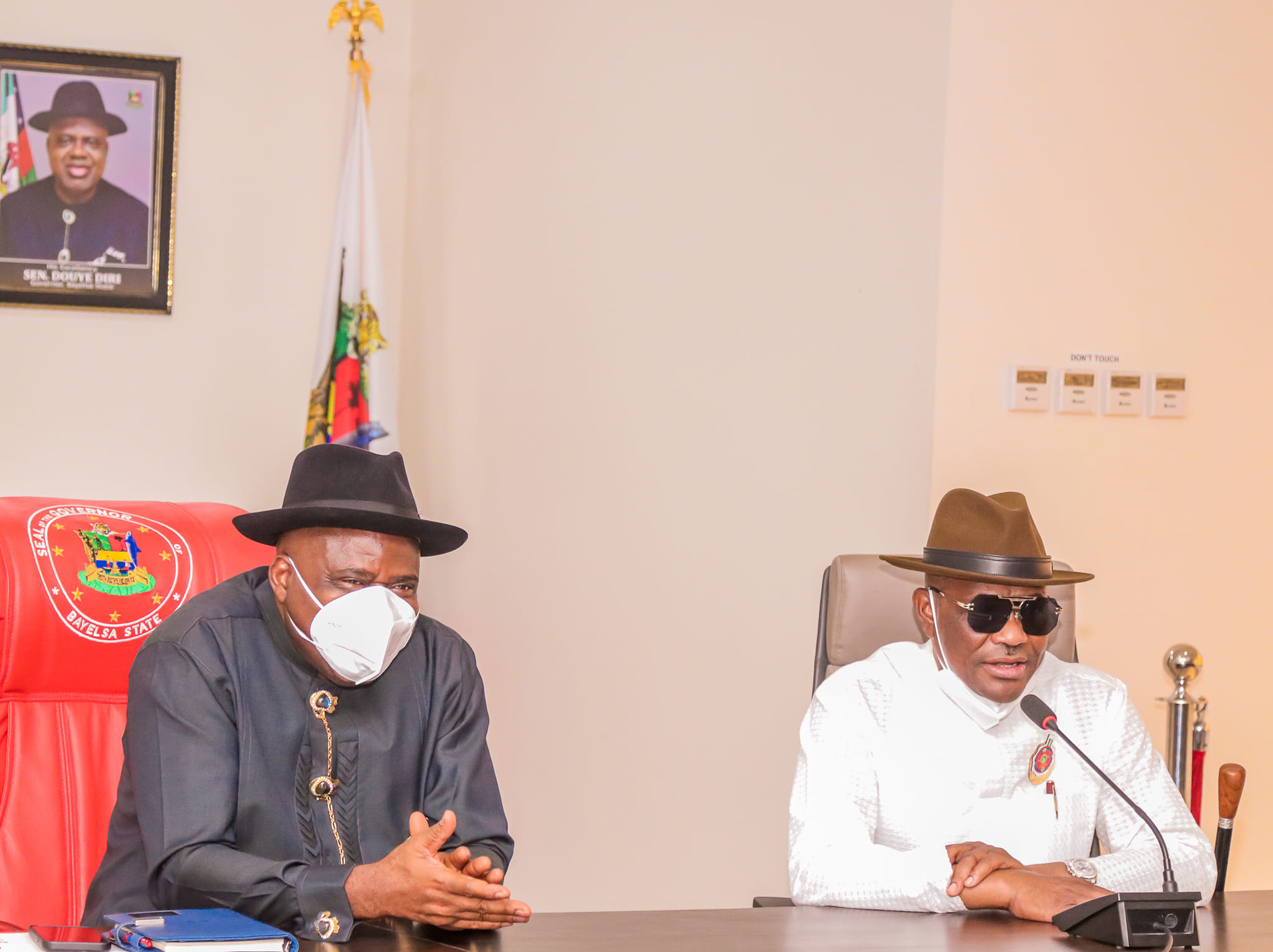 Ahead of the 2023 polls,the Bayelsa State Governor, Senator Douye Diri, and his Rivers State counterpart, Chief Nyesom Wike, have met in Government House Yenagoa,with governor Diri reassuring that the chances of the Peoples Democratic Party (PDP) producing the next President of Nigeria come 2023 were very bright.
The Tide which monitored the visit in Yenagoa reports that the governors of the two sister states who spoke on Monday when Governor Nyesom Wike of Rivers State visited his Bayelsa counterpart, Douye Diri at the Government House in Yenagoa also commended the developmental strides of each other.
Governor Wike’s host, Diri said only the PDP can rescue Nigeria from its present state of insecurity and economic woes,describing the presidency as a sacred office, just as he said the party has been repositioned to ensure it wins the presidency in the 2023 general elections.
A press statement made available to newsman shortly after the visit by the Chief Press Secretary to the Bayelsa state Governor, Mr Daniel Alabrah, quoted Governor Diri as saying that the PDP was the only party with the pedigree to give Nigerians hope and a sense of direction.
The statement reads in parts:”The presidency is one sacred office and we must do everything to protect it and ensure that our party clinches victory at the 2023 general polls.
“The number one thing for our party is our unity. Second is who becomes president. We have a capable national chairman that can steer us back to power come 2023.”
Governor Diri, who lauded the Rivers state governor for demonstrating leadership and purposeful governance also stressed that states in the Niger Delta needed to unite more to tackle their common challenges, particularly in the areas of environmental pollution and underdevelopment.
“Bayelsa and Rivers states are brothers and sisters historically and culturally and if anyone is trying to divide us, we must come against them.
“I call on Ijaw leaders to come together and resolve whatever issues we may have amicably. Within a family, we will always have issues but that should not remove our brotherliness,” Governor Diri said.
The Bayelsa state chief executive reemphasised the need for more consultations between him and his Rivers counterpart towards strengthening their bond of unity, just as he also commended Governor Wike for his role in ensuring the repositioning of the PDP, describing him as a committed party man.
Given his remarks, Governor Wike expressed confidence that the PDP will produce the next president of Nigeria, saying that Nigerians were waiting for the party to rescue them from the current situation in the country, noting that leaders and members of the party cannot afford to miss this opportunity.
He echoed the need for unity of purpose between Bayelsa and Rivers and the entire PDP, stressing that without a united front, success would be elusive.
The Rivers state chief executive thanked his Bayelsa counterpart for his developmental efforts and commitment to the party, urging the people of the state to continue supporting the state governor.
“Today, I came to let everybody know that Senator Douye Diri is one of the governors I can tell you has shown commitment even though he is new and he believes in the development of his state. I am not someone that will come and say what is not correct.
“I have also come to tell him that everybody must work together to make the PDP united because without party there cannot be presidential candidate. Let us all unite.
“Nigerians are waiting for PDP and we cannot afford to miss this opportunity. As governors, we must work together. Anybody can be presidential candidate but if we are not united it cannot be possible,” Governor Wike said.
The Tide reports that Governor Wike had as part of his entourage for the visit a high-powered delegation, comprising former Rivers state governor, Chief Celestine Omehia, two former Deputy Speakers of the House of Representatives, Austin Opara and Prince Chibudom Nwuche, respectively, as well as former Minister of Transport, Chief Abiye Sekibo.

One Killed In Delta Cult Clash