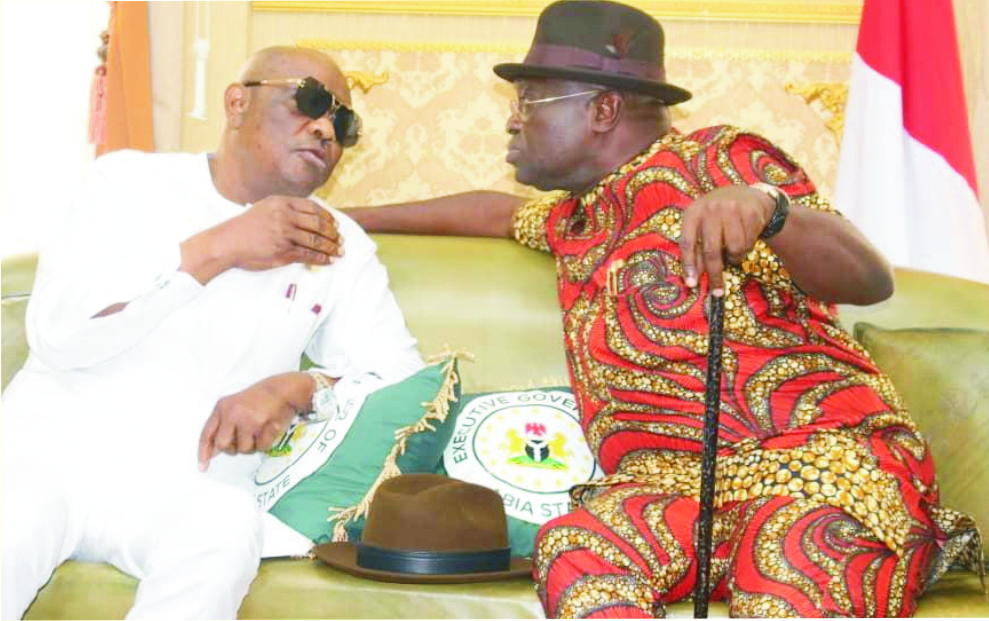 Abia State Governor, Okezie Ikpeazu and his Enugu State counterpart, Ifeanyi Ugwuanyi, have expressed deep admiration for the idomitable posture of the Rivers State Governor, Chief, Nyesom Wike, in promoting democratic ideals and good governance in Nigeria.
The two governors, who hosted Governor Wike at their country homes while the Rivers State Governor and his entourage paid them  special new year visits, said Governor Wike had  provided exemplary and quality leadership in Rivers State through the delivery of projects and also made bold his position on national issues of critical concern.
Addressing Governor Wike and his entourage at his home town of Umuobiakwa, Abia State, the Abia State Governor, Okezie Ikpeazu, said Rivers State was lucky to have Wike as their governor as he has demonstrated deep commitment towards good governance and the defence of the interest of Rivers people at all times.
He said the government and people of Abia State shared Governor Wike’s concern for a better Nigeria, and reiterated the need to join forces to salvage the country from further drift into the abyss.
Ikpeazu described Governor Wike as a determined and selfless leader who is not only focused on project delivery in his state,but providing true leadership for his colleagues to emulate. He said Nigeria needed leaders like Governor Wike to bring to the country and secure the future of the country for posterity.
In a similar vein,  Enugu State was agog for Governor Wike as the government and people of the state, led by the Governor, His Excellency, Ifeanyi Ugwuanyi, rolled out the drums to welcome Governor Wike on the visit that was carved as essential to deepen the relationship between Rivers and Enugu states.
Speaking at the reception which was held at the Governor’s home town of Orba in Udenu LGA of Enugu State, Ugwuanyi commended Governor Wike over his sterling leadership qualities, describing him as a bold, audacious leader who has given voice to the voiceless and remained firm in defending the principles of justice in Nigeria.
The Enugu State Traditional Rulers Council, led by its Chairman, HRM, Amb Lawrence Ajubuzo, also confered on Governor Wike the Chieftaincy Title of ‘Agunechi Ibe’ of Enugu State, for his contributions to good governance and democracy.
Meanwhile, Governor Wike within the week attended the 30th Edition of the Ogoni Day celebration held in Bori, the Administrative Headquarters of the Ogoni people as a special guest of honour.
Addressing the mammoth crowd at the event, Governor Wike decried the fact that real tenets of the Ogoni struggle as propagated by late environmental and minority rights activist, Ken Saro Wiwa has been politicised by the emerging leadership class in Ogoni.
The Governor cautioned against the tendency among political leaders in Ogoni to use the Ogoni Struggle to achieve personal gains at the expense of the people,and pointed out that Ken Saro-Wiwa and other Ogoni matyres paid a huge price for the emancipation of Ogoni and the Niger Delta from the shackles of marginalisation in Nigeria.
Governor Wike also stated that the federal government was taking the Niger Delta for granted because of disunity among the people, and referred to the development crisis in the oil rich region as a product of self marginalisation, as the leaders of the region were not working in one accord.