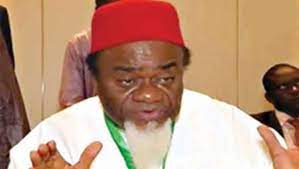 A Former Governor of Anambra State, Chukwuemeka Ezeife, says the South-East is prepared to kneel down for any region to garner support to clinch the Presidency in 2023.
Ezeife said this at the United For Better Nigeria Initiative national convention, held in Abuja at the weekend.
According to him, Nigeria has the potential of developing into a superpower, as such should carry everybody along without discrimination.
“I found Hausa, Yoruba, Igbo and other groups in this place talking about the need for federal character.
“There will be unity if there is fairness, equity, justice. In the absence of those, you see what we are now.”
According to him, even though the Igbo people don’t prostrate, “but this time, we are prepared to kneel down to every part of Nigeria, every group, every ethnic group in Nigeria.
“We are prepared to even prostrate because we believe in this country.”
Ezeife said Igbo people had contributed greatly to the development of Nigeria in terms of infrastructure, intellect, and business, as such Nigerians should give them the chance to develop the country.
“We must unite and the South-East has to bring their own,” he added.
Former president of the Nigerian Senate, Anyim Pius Anyim, however, said though it was neither a right nor legal for the South-East to demand for the presidency, it was morally right for all Nigerians to support them.
Anyim said the South-East should reach out and persuade other regions to support their dream of producing Nigeria’s President in 2023.
“Is it right for the South-East to produce the next president? My own answer is, legally no, and the reason is that the Constitution is clear, the Constitution says every Nigerian of 40 years is entitled to aspire for that office.
“On the other side, morally is it right, is it an entitlement? I will say yes, because the federal character principle enshrined in the constitution encourages rotation.

CAN Accuses El-Rufai Of Hidden Agenda