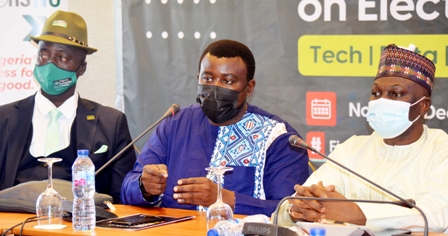 The Bayelsa State Governor, Senator Douye Diri, on Wednesday returned from visiting the oil spill site in Nembe Local Government Area of the state, describing it as the worst he had seen in his lifetime.
The OML 29 Well 1 platform, which is operated by Nigeria’s largest indigenous oil firm, Aiteo Exploration and Production Company Limited, has been spilling crude unabated into the Santa Barbara River for about one month.
An estimated two million barrels of crude has reportedly been spilled into the river, polluting the flora and fauna of the area, the governor’s spokesperson Dan Alabrah, said.
The Minister of State of Environment, Sharon Ikeazor, had said the scene of the spill was like a war zone.
Overwhelmed by the spill, Aiteo hired Halliburton’s Boots and Coots to “kill the well” by injecting cement into it. It bought the well from the Royal Dutch Shell in 2015.
As at Wednesday, the Bayelsa government said the spill that began November 5 was still ongoing.
Governor Diri said the continuous spillage has further endangered the lives of people of Nembe, Bayelsa and indeed the Niger Delta.
In a statement issued by his Chief Press Secretary, Mr Alabrah, the governor, who expressed shock over the quantity of crude that has been spilled into the environment, called on the Federal Government and operators of the oil field to immediately take action to stop it.
According to him, the prolonged oil spill into the water and air had an immediate and long term effect on the health of the inhabitants.
While assuring the people that appropriate measures would be taken to seek redress, he noted that the quest by oil firms to make money would not be at the expense of the lives of the people.
Describing fishing as the source of livelihood of the people of the area, Mr Diri noted that just as there are grazing routes, Bayelsa State has fishing routes and must be protected.
His words: “Today happens to be a very dark day for me. What we have seen, I believe, is worse than what happened in the Gulf of Mexico. In all my life, I have not seen such magnitude of oil spillage.
“Our people are endangered. Our people’s source of livelihood is endangered. I empathise and sympathise with the people of Nembe on behalf of the government and people of Bayelsa State.
The Bayelsa governor also decried the exclusion of indigenes of host communities in the running of the oil industry, saying that if indigenes were part of the operations of the oil field, they would have looked for ways to address the problem.
To ameliorate the suffering of the people, the governor directed the State Emergency Management Agency and Ministry of Health to immediately provide relief materials and healthcare services to the people.
Earlier, the chairman of Nembe Local Government Area, Hon. West Alalibo, and member representing Nembe Constituency 2 in the State House of Assembly, Edward Brigidi, appreciated the governor for embarking on an on-the-spot assessment visit to the site.