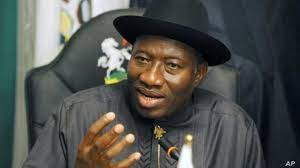 Former Nigerian president, Goodluck Jonathan and former manager, finance and budgeting of the Nigerian National Petroleum Corporation (NNPC), Dr Stanley Lawson at the weekend were bestowed with awards by the University of Port Harcourt ‘class of 1981’ alumni association.
The Tide which monitored the award ceremonies reports that the awards were a fall out of a three day ‘reunion meet’ organized by the pioneer Students-graduands of the University held in Yenagoa, the Bayelsa state capital.
The erstwhile president’s award tagged, ‘Award of Excellence for Global Citizenship’ and that of the former NNPC’s top echelon christened ‘Award of Excellence’ respectively, the pioneer Uniport graduates have said were necessitated by the recipients exemplary leadership as well as professional excellence in their chosen careers, amongst others.
“Jonathan has been a role model and a worthy example of what was expected of every University of Port Harcourt bred graduate. He served Nigeria meritoriously and has become a global citizen, a global brand.
“Lawson has also been a pillar of this association and has excelled so well in his chosen career. He single handedly hosted the first reunion of this association in 2017 in Abuja. Indeed both of them were carefully selected for this awards”, the alumni said.
In his remarks upon receiving the award, the former president described the class ’81 fondly called ‘UU 81’ as a pacesetter for the Rivers State located institution.
He thanked the association for finding him and Lawson worthy of the awards, saying that all members of the association deserve one form of award or the other, following their various contributions not only to the University, but to national unity, development and excellence in their respective endeavours.
“The ‘ class 81, ‘UU 81’ of the University of Port Harcourt was and has continued to be a pacesetter class. Indeed, every member of this class like alumni members of other Universities and institutions in Nigeria has contributed to the development of this nation in various ways.
“And so it’s believed that everybody, all members of the Class ’81 of the University of Port Harcourt deserves an award.
“We’re so lucky, during our time there was no JAMB, you just apply for any University of your choice, so some persons, depending on your financial strength could apply for two and some even three Universities. But I was able to apply for just two, Uniport and Nsukka, and so Uniport granted me admission as one of her pioneer students in the school of Biological sciences in 1977 and we graduated as pioneers in 1981.
“And since after our graduation, 40 years ago, we’ve been living as brothers and sisters, as members of one indivisible family”, Jonathan said.