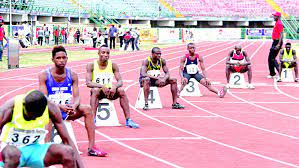 United States-based Nigerian former athlete, Victor Okorie, is planning to stage a maiden Southeast Sports Festival in 2022 to prepare athletes in the region for the national sports festival billed to hold in Asaba, Delta State.
Okorie, who is the Performance Director of the Athletics Federation of Nigeria (AFN), said he would meet with governors and some stakeholders in the region soon, as part of his arrangements for the event.
Before his emergence as the Southeast zonal representative on the AFN board during the elective congress held in Abuja on June 14, Okorie had sponsored a competition for track and field athletes through his pet project, the South East Sports Foundation.
The competition, which held in Enugu, saw athletes from Abia, Anambra, Imo, Enugu and Ebonyi compete for prizes in sprint events, throw and jump.
The foundation also plans to organise competitions for the physically challenged athletes in the zone in line with Okorie’s view of taking physically challenged athletes in Southeast away from the streets, as well as integrate athletes in volleyball, handball, wrestling, and other sports on the same level with their foreign-based counterparts.
Speaking with newsmen, from his base in Tennessee, USA, Wednesday, Okorie, who won a silver medal for Nigeria at COJA 2003 All Africa Games in Abuja, said that the maiden Southeast Sports Festival would give the states chance to raise formidable squad for Asaba 2022.
“Sports are one major avenue governors in the southeast states can use to empower youths in the region,” Okorie said.
“I will meet with them and other stakeholders soon, on how we will stage a successful Southeast Sports Festival, which will serve as selection ground ahead of Asaba 2022 National Sports Festival. There is the need to re-awake sports campaign in the Southeast zone. Maybe, the next host of the national sSports festival will come from the Southeast after Asaba 2022,” he added.