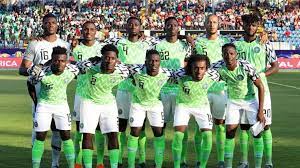 The Nigeria Football Federation has debunked the allegations that some Super Eagles players were involved in a sex party before their 2022 World Cup qualifier against Cape Verde in Lagos on November 16.
The Eagles could only manage a 1-1 draw against Cape Verde, which drew the ire of fans despite being enough to qualify them for the playoffs.
The team’s lacklustre performance has been the major reason for the moves by the NFF to relieve coach Gernot Rohr of his job and appoint a new coach for the team before the 2021 Africa Cup of Nations, starting in Egypt next January.
News, however, broke out on social media on Monday that Rohr had wanted to drop three players from the team after they had broken camp rules before the game.
The report however said the coach was prevailed upon by NFF President, Amaju Pinnick, which made him start two of the three players.
The reports revealed the three players who allegedly organised the sex party as Leicester City forward, Kelechi Iheanacho, Alanyaspor defender, Chidozie Awaziem and Leganes defender, Kenneth Omeruo.
When the  NFF Director of Communications, Ademola Olajire, was contacted, he denied that anything of such ever happened.
“The NFF has no comment, they can write whatever they want to write because it didn’t happen,” Olajire said.
A source close to Omeruo also speaking to newsmen on the condition of anonymity denied the defender’s involvement in any sex party.
He alleged that the story was planted to force Omeruo out of the Eagles.
“Omeruo is not happy about the news accusing him of being involved. He feels it’s coming from those who want him out of the Eagles by force,” Tidesports source added.