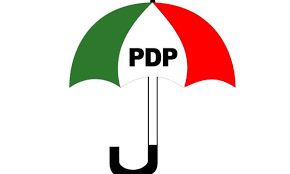 The Peoples Democratic Party, PDP, Ebonyi State chapter, says it has zoned its governorship ticket to the Abakaliki bloc ahead of the 2023 general elections.
Abakaliki bloc comprises two senatorial zones, Ebonyi North and Central.
The state chairman, Elder Fred Udeogu, made this known while speaking with journalists in Abakaliki, the state capital.
He noted that the two senatorial zones will harmonise, decide for themselves on whether the North or the Central will produce the next governor of the state.
Udeogu equally noted that the stakeholders of the party zoned the party’s chairmanship position to Ebonyi-South senatorial zone, whereas the publicity secretary is zoned to Ebonyi-Central zone among other positions.
“We started with zoning, our party leaders decided to zone the governorship position to Abakaliki bloc. Ebonyi South are the ones holding the governorship position now, they don’t have to go again but we have zoned the Party chairmanship to them.
“And so, when the time comes, the Abakaliki bloc will now harmonise on whether the governorship position will go to either Ebonyi-North or Central zone,” he said.
Elder Udeogu also said that his party conducted Ward Congress in the 171 political wards of Ebonyi state on Saturday, September 25, 2021.
He had charged party supporters to conduct themselves orderly and should eschew all forms of violence during the Congresses, adding that PDP was a reformed party that prepared to show examples to other political parties in Nigeria.
According to him, “As you can see, we have commenced the distribution of wards, local governments forms yesterday. Outside that, there are other basic things we are doing to make sure that the Congresses are successfully conducted.
“We have written to Police, DSS and other security agencies, we have equally written to INEC to alert them on our ward congress that will hold coming Saturday. All the preparatory arrangements have all been done.
“We have equally set up electoral appeal panel to entertain some matters that may arise. We are conscious of the fact that we are in the opposition party, and we are putting our house together.
“I’m very much confident that our congress will be peaceful and successful. You don’t trust human beings but I have 99.9 per cent confidence that the congress will be perfectly conducted.
“We are doing all we can to takeover Ebonyi State. APC will be surprised by the outcome of our congresses,” he said.

The Northern Governors Forum has congratulated Muslims in Nigeria on the occasion of Eid-el- Maulud, charging them to live in love.
The chairman of the forum and governor of Plateau, Simon Lalong,  felicitated with the Muslims and gave the charge in a statement by his Director of Press and Public Affairs, Dr Makut Macham,  yesterday in Jos.
According to the statement,  the special occasion marking the birth of the Holy Prophet Muhammad, is a reminder of his teachings of love, forgiveness, peaceful coexistence and humility among others.
It further said that the failure of humanity to practice love is what has given rise to selfishness, violence, intolerance, religious bigotry, ethnic hatred, corruption, high crime rate and wickedness in the society .

The Global Initiatives for Anambra Needs (GIAN) a pressure group, has cautioned the electorate against boycott of the Nov. 6 Anambra governorship poll.
Mr Francis Okafor, Director of Publicity, GIAN, made the call in a statement on Tuesday in Awka.
Okafor urged the State Government to work with security agencies to ensure adequate security in the state before, during and after the election.
He appealed for calm and enabling environment for the people to come out in their numbers to vote during the election.
“We must make the electoral process credible, so that our state can know peace that supports development.
“Anyone who has the interest of the state at heart should resist any call to boycott the governorship election.
“Boycotting the election will amount to shooting oneself in the feet and such situation could create room for unchecked rigging of the election.
“All hands must be on deck. Our people should not only cast their votes for the candidate of their choice, but also wait behind and insist that the process goes on without corruption or disruption,” he said.
Okafor urged the electorate to resist vote buying and selling to ensure a successful and credible election.
“As a people,we must work against the new political trend of vote buying and selling.
“It is a minute trading that gives away our four years of freedom from various ills and vices. We must resist it, “ he said.
Okafor also urged residents not to be distracted by the gale of defections among politicians in the state.
“Most of the defection is about personal interest and materialism and not in the interest of the masses or the development of the state,” he said.

Governor Douye Diri of Bayelsa State is confident that the Peoples Democratic Party (PDP) would win the 2023 presidential election because “Nigerians are waiting for the party to take over” at the centre.
The governor also boasted that PDP governors are the best performing governors in the country.
A statement by his Chief Press Secretary to the Governor, Mr Daniel Alabrah, quoted the governor as saying that the opposition party is poised to win the 2023 presidential election.
Diri also advised party members to remain steadfast and united to ensure that the PDP returns to power in 2023.