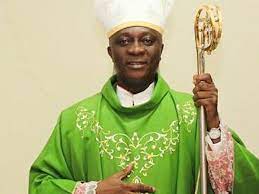 The Lagos Catholic Archbishop, Alfred Adewale Martins, yesterday, said that the administration of President MuhammaduBuhariwas not sincere with the fight against insecurity as it continues to hinder willing groups and not equipping the security forces.
Martins stated this in Lagos State at the grand finale of the 60th anniversary celebration of a Catholic group, Knight of Saint Mulumba, adding that breakdown in the policy and values has led to emergence of unpatriotic leaders.
Martin, who coincidentally celebrated his 38th priestly ordination, said that Nigerian politicians have lost faith on service to humanity, and were in search of personal gain.
He related it to the trending case of Femi Fani-Kayode, who recently joined All Progressives Congress (APC).
“Insecurity is the major problem we have in Nigeria currently; places of worship are not safe.
“The government is supposed to have access to experts who will bring in their expertise to solve the problem but that is not so. When you hear the kind of complains and dissatisfaction from the military and different sides you will know that there is inadequate sincerity by the government. There are inadequate arms supplied to the security.
“One of the things about Nigerian politicians is inconsistency in goals and principles. When Fani-Kayode was criticizing Buhari it was not based on principles of not he would not join or switch to APC. It is not surprising that we are where we are today because we have people like him who are inconsistent,” he stated.

Eight Nigerians aged between 33 and 52 were, yesterday, arrested for Internet scams, money laundering and international-wide scale financial fraud in Cape Town.
According to reports, those arrested were members of the Black Axe that preys on widows or divorcees and scammed them out of their millions.
Six leaders and the founder of the Black Axe organised crime group’s Cape Town chapter were amongst those arrested.
The group is believed to be behind hundreds of thousands of romance scams.
Spokesperson for South Africa’s Directorate for Priority Crime Investigation (DPCI), otherwise called Hawks, Col. Katlego Mogale said the operation involved the Federal Bureau of Investigations (FBI), United States Secret Service (USSS) Investigations and Interpol.
They were assisted by the Hawks Serious Commercial Crime Investigation unit, Crime Intelligence (CI), K9, National Intervention unit, Special Task Force (STF), Tactical Operations Management Section (TOMS), Criminal Record Centre and Cape Town Metro Police.
According to reports, Mogale said the operation was initiated based on the Mutual Legal Assistance from Central Authorities of the United States of America that was approved by the Republic of South Africa.
She said all suspects were arrested during a large-scale operation in the early morning hours of yesterday, and would be charged with a variety of financial crimes, including conspiracy to commit wire/mail fraud/mail and money laundering.
“The suspects in this investigation are alleged to have ties to a transnational organised crime syndicate originating in Nigeria,” she said.
It was alleged that those suspects allegedly preyed on victims, many of whom were vulnerable widows or divorcees who were led to believe that they were in genuine romantic relationships but were scammed out of their hard-earned money.
The suspects used social media websites, online dating websites to find and connect with their victims.
Other modus operandi used by the suspects includes business email compromise, where email accounts are diverted in order to change banking details.
They assumed fake names and trolled dating sites.
Mogale said once they had ingratiated themselves with their victims, they allegedly concocted sob stories about why they needed money – taxes to release an inheritance, essential overseas travel, crippling debt, etc. – and then siphoned money from victim’s accounts to the amount of R100million.
She said the crimes allegedly committed by the suspects hit close to home.
Neighbours, parents, friends and family would be targets of this organisation.
“The fraudsters intimidated and berated their victims, ruined their lives and then disappeared. We are confident that this investigation will have a significant impact on this region and beyond,” Mogale said.
The FBI estimates that more than 100 people lost more than R100million in romance scams from 2011 till date.

All is now set for the 17th All Nigeria Editors’ Conference, starting tomorrow, with Publisher of Premium Times, Mr. Dapo Olorunyomi; Editor-in-Chief of Leadership Newspaper, Azu Ishiekwene; Minister of Works, Mr. Babatunde Fashola; Group Managing Director, Nigerian National Petroleum Corporation (NNPC), Malam Mele Kyari; Chief of Defence Staff, Gen. Lucky Irabor, and other security chiefs, scheduled to lead discussions at the conference.
A statement signed by the NGE President, Mustapha Isah; and General Secretary, Iyobosa Uwugiaren; indicated that some state governors with security challenges, including Dr Ifeanyi Okowa (Delta); Malam Nasiru el-Rufai (Kaduna); Alhaji Yahaya Bello (Kogi); Engr. Seyi Mankide (Oyo); Alhaji Bello Matawalle (Zamfara); Prof Babagana Zulum (Borno), and Chief David Umahi (Ebonyi) have also been scheduled to be part of the conversation.
Others state governors expected at the event include, Oluwarotimi Odunayo Akeredolu, SAN (Ondo); Prof Adegboyega Oyetola (Osun); and others.
The conference with the theme, ‘’Media in Times of Crises: Resolving Conflict, Achieving Consensus’’, would bring together editors and media owners across the country, as well as their foreign colleagues to discuss the security challenges in the country and agree on the solution to the raging strife.
Sponsored by corporate moguls, including Central Bank of Nigeria (CBN), United Bank for Africa (UBA), Glo, Zenith Bank, Access Bank, Air Peace, and Trustfund Pensions Limited, the conference would take place at the Nigerian Air Force Conference Centre, Kado area of Abuja.
Other promoters are Nigeria Deposit Insurance Company (NDIC), Federal Inland Revenue Service (FIRS), and the Yobe State Government.
Olorunyomi, an accomplished internationally acclaimed investigative journalist and journalism teacher, would give the keynote address that would be discussed by security chiefs, including Monguno; Irabor; Director-General, Department of State Services (DSS), Mr. Yusuf Bichi; and the Inspector-General of Police, Mr. Usman Baba.
The NGE said Kyari would be the special guest of honour, while the President, Newspapers Proprietors Association of Nigeria (NPAN), Malam Kabiru Yusuf, would be the guest of honour.
‘’A doyen of the media, Mr. Ray Ekpu, would chair the opening session with Fashola and others, including President, Nigeria Union of Journalists (NUJ), Comrade Chris Isiguzo, and foreign ambassadors giving goodwill messages.
‘’Besides the opening session, the conference would have three others; the second session for the Day 1 of the conference has a paper titled, ‘Conflict Reporting: The Editor as a Mediator’, to be delivered by the Editor-in-Chief, Leadership Newspapers, Mr. Azu Ishiekwene.
‘’The paper would be discussed by Editor-in-Chief, 21st Century Chronicle, Dr. Mahmud Jega; Director-General, Federal Radio Corporation of Nigeria (FRCN), Mr. Mansur Liman; and another leading journalist, Mr. Emmanuel Yawe. Notable broadcaster, Ms. Kadaria Ahmed, would chair the session’’, the statement added.
The statement said that the morning session of the Day 2, would have Managing Director, Nigerian Incentive-Based Risk Sharing System for Agriculture Lending (NIRSAL), Mr. Aliyu Abdulhameed, presenting a paper, ‘’Accessing Capital for Alternative Career Development for Editors.’’
Discussants at the session to be chaired by the Managing Director/CEO, Access Bank Plc, Mr. Herbert Wigwe, are former NGE President, Mrs. Funke Egbemode; Managing Director of New Telegraph Newspapers, Mr. Ayodele Aminu; and Executive Director (News), FRCN, Mr. Sani Suleiman.
The afternoon session with the theme, ‘’Security Challenges: Recovering Lost Grounds’’, which the statement explained, would be attended by state governors, would be chaired by the Minister of Defence, Maj-Gen. Bashir Magashi.
“The conference is to be rounded off in the evening with the induction of new fellows and members of the Guild,” the statement stated.
Over 300 editors and media owners – from print, broadcast stations and online newspapers have registered for this year’s conference.