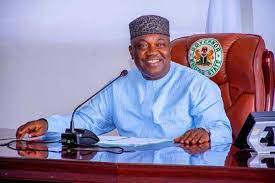 Governor Ifeanyi Ugwuanyi of Enugu State last Tuesday, at the Executive Chamber of the Lion Building, Government House, Enugu, swore in Mrs. Ukamaka Alinta Oriaku as member of the reconstituted Enugu State Judicial Service Commission, which was recently inaugurated by the governor.
Other members of the Enugu State Judicial Service Commission who were sworn in by Gov. Ugwuanyi on August 11, 2021, before inaugurating the newly reconstituted Commission were Barr. Ben Chukwuemeka Ezeugwu, Mr. Ifeanyi Emma Jonathan-Ogbu and Mr. Emmanuel James Chiezue Ugwu.
According to the composition of the Commission, the Chief Judge of the State serves as the Chairman while the State Attorney-General and the President of the State Customary Court of Appeal are members by virtue of their positions (ex-officio). The rest of the members are nominated and subsequently confirmed by the State House of Assembly.
The Commission has the mandate “to advise the Governor in nominating persons for appointment as Chief Judge of the State; President of the Customary Court of Appeal of the State; Judges of the High Court of the State; and Judges of the Customary Court of Appeal of the State”.
The Commission also has powers to recommend to the Governor the removal from office of judicial officers and the exercise of disciplinary control over such officers.
In the same vein, the Commission has “the powers to appoint, dismiss and exercise disciplinary control over the Chief Registrar and Deputy Chief Registrar of the High Court, the Chief Registrar of the Customary Court of Appeal, Magistrates, Chairman and members of Customary Courts, and all other members of the staff of the judicial services of the state not otherwise specified in the Constitution, and all staff of the Judicial Service Commission”.
Ugwuanyi had during the inauguration of the reconstituted Commission described it as “both the soul and standard-bearer of the State Judicial system”.
In a brief response after her swearing in, Mrs. Oriaku thanked Gov. Ugwuanyi for finding her worthy to serve the state in such capacity and pledged to discharge her duties to the best of her ability as well as work with other members of the Commission to make the governor and the state proud.

Buhari On A Jamboree Visit To Uzodinma -Ohanaeze