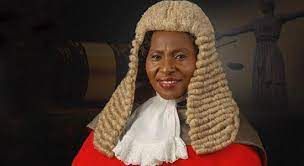 Hon. Justice Centus C. Nweze of the Supreme Court of Nigeria has eulogized the retiring Chief Judge of Enugu State, Hon. Justice Ngozi Priscilla Emehelu, for the outstanding achievements she recorded in transforming the State Judiciary.
Hon. Justice Nweze who spoke at a gala night organized by Governor Ifeanyi Ugwuanyi of Enugu State, in honour of the outgoing Chief Judge, yesterday, disclosed that Hon. Justice Emehelu, whose retirement took effect midnight of Tuesday, September 7, 2021, was able to record those remarkable feats in the State Judiciary because of the kind of governor she served under his leadership. He stressed that she was a lucky Chief Judge.
“My Lordship (Chief Judge), The Lord has blessed you and part of this luck is serving under the leadership of His Excellency (Ugwuanyi). I am not saying this because His Excellency is here; those of you who were here 20 years ago know what we went through; those who were here 15 years ago know what we went through.
“We pray that the new Chief Judge of Enugu State will continue with this good work”, Hon. Justice Nweze said.
In his commendation address, Gov. Ugwuanyi described Hon. Justice Emehelu as an erudite lawyer and esteemed Judicial Officer, who bestrode the State Justice Sector as Attorney-General before her well-deserved appointment as a Judge and subsequent appointment as Hon. Chief Judge of the state, “the latter being the jewel in her crown of successes in her career”.
The governor who acknowledged with delight, the dedication and diligence with which Hon. Justice Emehelu discharged her duties, pointed out that “the Enugu State Judiciary and indeed the entire state are happily reaping the fruits of the transformative reforms and innovations that she engendered as the Hon. Chief Judge of the State”.
Pouring further encomiums on her, Gov. Ugwuanyi said: “Tonight, as we unite in banquet to celebrate the retirement of this outstanding standard-bearer of the Enugu State Judiciary, we laud her era of focused and impactful leadership.
“Your Lordship, Hon. Justice Ngozi Priscilla Emehelu, it is indeed a time to bow out of over two decades of a brilliant and exciting career; a time to give thanks to Almighty God for his wonderful blessings; a time to be celebrated by colleagues, associates, family, friends and the State; a time to get some rest; a time to introspect; and a time to chart a new course in life.
“In this time, Your Lordship, I assure you of our friendship and best wishes for great success in all your future endeavours as well as our prayers for unceasing testimonies of God’s grace in your life. Congratulations!”.