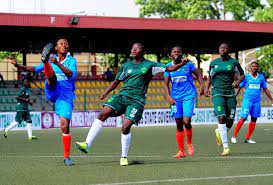 The Coordinator of Coal City Football League, Emeka Okparaji, says 15 teams will be featuring in the 2021 edition of the league when it begins on Sunday in Enugu.
Okparaji,  who said this at the pre-tournament media briefing in Enugu on Wednesday, disclosed that 15 teams from different parts of Enugu state were ready for the league.
The league is being organised by GOFEC Movies Industry Limited.
This is in conjunction with Zenith Bank of Nigeria, Enugu State Football Association (ESFA) and the state Ministry of Youths and Sports.
“It is a neighbourhood tournament whose first edition was held in 2020, with Emene United winning,” Okparaji said.
He disclosed that Coal Camp Team and Obiagu Team would play in the first match of the 2021 league on Sunday.
Speaking also at the media briefing, the Chief Executive Officer of GOFEC Movies, Donben Chisom, commended the teams which have registered for the league.
He also lauded the league’s coordinator for the success of the first edition in 2020 and called for better outing and organisation in the 2021 league.
Coach of Emene United, Tim Okoro, on his part said his team were ready for the second edition of the league.
“We won the first edition in 2020 because the Emene axis of the state is like a poultry farm for young players.
“This year, we will do all in our power to retain the trophy, because we are still hungry for more success in the league,” he said.
Callistus Ibe, the Agani Road Team’s coach, however disagreed with Okoro saying that a lot had changed since after the first edition.
He identified the Coal Camp Team rather as the “stumbling block” the Agani Road Team would need to “roll away” to become the new champions.
The 2021 league will begin on Sunday and is expected to end on December 19.
The Rangers International FC training pitch and UNEC field will serve as venues for matches in the competition’s group stage, quarter-finals and semi-finals.
Nnamdi Azikiwe Stadium in Enugu will host the competition’s opening ceremony, as well as the final match and closing ceremony.