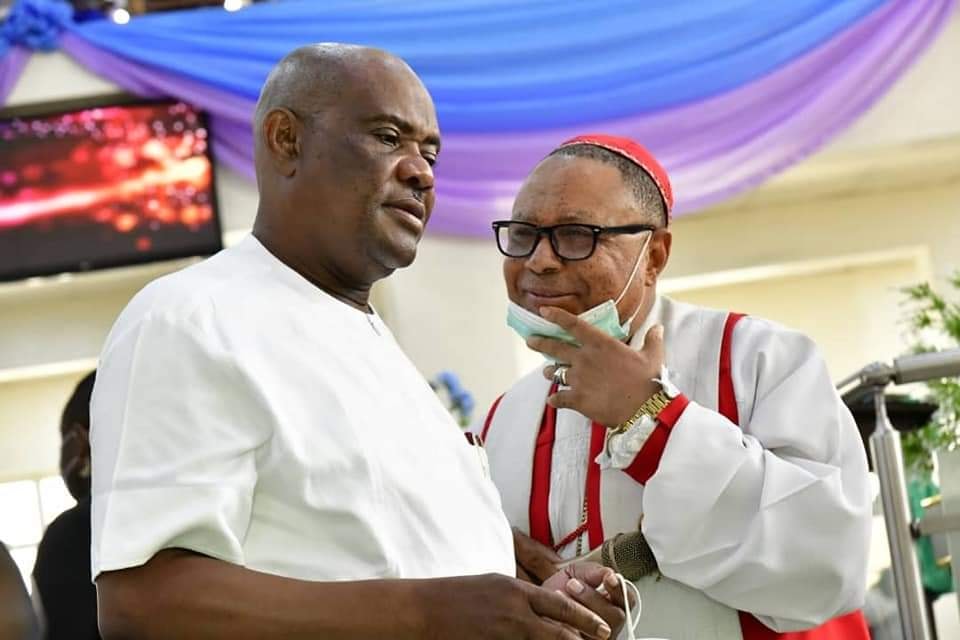 The Methodist Church Nigeria, Diocese of Port Harcourt has bestowed it’s Silver Leadership Mentorship for Peace award on Rivers State Governor, Chief Nyesom Wike.
The Archbishop of the Port Harcourt Archdiocese, Most Rev. S. I. O. Agwu, conferred the award on the governor during the wedding ceremony of Tamunodiepiriye Sekibo and Orowhuo Okocha at Wesley Methodist Church, Port Harcourt, last Saturday.
The church said the award was in recognition of Wike’s outstanding commitment and dedication to the service of God, humanity and the society in general.
Wike, who expressed gratitude to the Methodist Church for the honour, reiterated that his administration would never relent in its support for the church.
He announced a donation of 50 plots of land by the state government to the Methodist Church to build their permanent camp in Greater Port Harcourt City.
“I thank you very much for your continuous prayers for the government and the state.”
The governor congratulated the couple for their successful wedding, and prayed God to bless their marriage.
The Archbishop of the Port Harcourt Archdiocese, Most Rev. S. I. O. Agwu, who had earlier requested for the state government’s support for acquisition of land to build a permanent camp ground for the Methodist Church in the state, thanked the governor for the donation.
He said the church would remain eternally grateful to the governor for his tremendous support to the body of Christ in the state.
In his sermon, the Archbishop, Most Rev. S. I. O. Agwu, advised the couple to allow God to be at the centre of their marriage.
He urged the bride, Tamunodiepiriye, who is the daughter of former Minister of Transport, Dr. Abiye Sekibo; and the groom, Orowhuo Okocha, the son of former President, Nigerian Bar Association (NBA), Onueze C.J. Okocha (SAN) to complement each other in marriage.
The archbishop encouraged the couple to trust each other in order to prevent the devil from sowing seed of discord in their home through distrust.
“Trust each other. Suspicion is a marriage killer. Where trust is lacking in marriage, something is wrong”, he counselled.
He cautioned them to be wary of third party interference because this has ruined several marriages.
Guests at the wedding included, the Sokoto State Governor, Rt. Hon. Aminu Waziri Tambuwal; Deputy Governor of Rivers State, Dr. Ipalibo Harry Banigo; former Rivers State governor, Dr. Peter Odili, and his wife, Justice Mary Odili; former Rivers State governor, Sir Celestine Omehia; and the State Chairman of the Peoples’ Democratic Party (PDP), Amb Desmond Akawor.
Also in attendance were, the Speaker of the Rivers State House of Assembly, Rt. Hon. Ikuinyi-Owaji Ibani, former Deputy Speaker House of Representatives, Rt. Hon Austin Opara, members of the State Executive Council, chiefs, families of the couple, friends and well-wishers.