Amid surmountable challenges, the Rivers State Commissioner of Police, CP Eboka Friday has urged police officers to emulate the outgoing Zone 16 ,Assistant Inspector General of police, AIG Austin Agbonlahor
CP Eboka said police would overcome its surmountable challenges when citizens show more support and appreciation to the sacrifices officers make in the course of duties
The Rivers state CP made the remark during the send off /60 birthday Anniversary of the outgoing AIG zone 16 on Sunday in Yenagoa, Bayelsa state capital
CP Eboka urged officers to emulate Austin whom he described as a refined officer whose wealth of experience and knowledge had been a source of inspiration
He pointed out that his former boss, AIG Agbolahor had been handy to advised him in carrying out his duties effectively, describing him as exceptional officer whose contribution and impact to the force will be greatly missed.
While thanking God for successful retirement after 35 years of service.
CP Eboka further assured that the police would not relent in their duties of protecting lives and property despite evil imagination of few elements.
In his remark, the celebrant, AIG Austin Agbonlahor said he remained grateful to God for successful completion of service.
AIG Austin said he lacked words to thank God for his benevolence upon him and his family
He said since 1988 he joined the police till date God had been awesome hence the double celebrations.
AIG Austin said although he is retired but not tired, encouraging other officers to put in their best in the service to the country
In her speech, Woji Divisional police Officer, SP Henrietta Eboka lauded AIG Agbolahor for his commitment and selfless service to safeguard Zone 16 during his tenure
SP Henrietta said while it was germane to appreciate and recount his noble contributions in ensuring that residents of both Rivers and Bayelsa enjoy peaceful environment, the public should as well support the force in the fight against crime
Earlier, the zone 16 Police Public Relations Officer, CSP Kevin Lafieye said her joy knew no bound for the successful and fruitful retirement of her boss.
CSP Kevin said she is thrilled because her boss retired alive aside the enormous challenges
She said successful completion of his course after 35 years calls for joy.
Also speaking, former Rivers State Police image maker and current Chief Superintendent of police in charge of administration zone 16 Yenagoa, CSP Rita Inoma-Abbey has described out going AIG zone 16 as a teacher, counsellor and boss.
CSP Abbey said his wealthy of experience and things he has taught officers like her will be utilised maximally even in his absence
Former Rivers State Police Public Relations Officer said retiring alive was the dream of every officer, thanking God for his contributions in the force/

Conflicting Decisions Of Court Of Appeal On Stamp & Seal 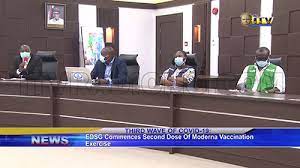 The Supreme Court yesterday fixed November 1 for definite hearing in the legal battle between Rivers and Imo States over the ownership of 17 oil wells.
The apex court fixed the date after the Attorney-General of the Federation (AGF) as 1st defendant and Imo State as 2nd defendant formally made appearances through their lawyers, Remi Olatubura, SAN and Chief Olusola Oke, SAN, respectively.
Justice Kekere Ekun set the stage for determination of the suit instituted by Rivers State against its Imo State counterpart shortly after identifying some of the processes so far filed for and against the legal action.
Ekun who led a panel of seven Justices of the court in a short ruling ordered parties in the suit to file and exchange fully their respective processes between now and Nov. 1 when the suit would be heard.
At the proceedings, Imo State’s Lawyer informed the court that he had filed a motion on notice challenging the jurisdiction of the apex court to hear the suit as a court of first instance.
He predicated the challenge on the fact that the suit was instituted against actions of some federal government agencies and not the Federal Government itself and as such, the place to hear the matter is a Federal High Court and not the Supreme Court.
However, counsel to the AGF said he had filed a counter affidavit against the writ of summons of Rivers State.
Lead counsel to Rivers State, Mr Joseph Daudu, SAN, in his response demanded for seven days to file reply on points of law to the motions of the two defendants.
The apex court had on July 14 granted an order of injunction stopping the Federal Government and it’s agencies from ceding the 17 disputed oil wells located at Akri and Mbede to Imo State.
The order of injunction was granted to stop an alleged implementation of the ceding of the 17 oil wells to Imo State pending the determination of the suit brought before it by the Rivers State Government.
The Supreme Court had in a chamber ruling by an ex-parte application argued by Emmanuel Ukala, SAN, restrained the AGF and the Attorney General of Imo State from taking any further action on the ownership of the disputed 17 oil wells till the ownership disputes surrounding them are resolved.
It also barred the Revenue Mobilisation Allocation and the Fiscal Commission, RMAFC, and the office of the Accountant General of the Federation from approving, implementing, or giving effect in any manner to a letter from RMAFC office, with reference number RMC/O&G/47/1/264 of July 1, 2021, which canceled the equal sharing of proceeds from the 17 oil wells by Rivers and Imo States.
Rivers through its Attorney-General had dragged the AGF and the Attorney General of Imo State before the Supreme Court praying for declaration that the boundary between Rivers State and Imo State, as delineated on Nigeria administrative map , 10, 11 and 12 editions and other maps bearing similar delineations are inaccurate, incorrect and do not represent the legitimate and lawful boundaries between Rivers and Imo States.
Plaintiff also sought a declaration that as far as Nigeria’s administrative map 10,11 and 12 editions and other maps bearing similar delineations, relate to the boundaries between Rivers and Imo, are unlawful and void.
The plaintiff also said the maps cannot be relied on to determine the extent of the territorial governmental jurisdiction of Rivers State and to determine the revenue accruing to Rivers State from the federation account, including the application of the principle of derivation and other revenue allocation principles as contained in the 1999 Constitution.
It further applied that the Supreme Court declare that the correct instrument maps and documents, to be relied on determining the boundary between Rivers and Im States, are those used by the plaintiff in delineating the boundary line between Rivers and Imo States.
Plaintiff also sought declaration that all the oil wells within Akri and Mbede communities are wrongly attributed to Imo State.
The plaintiff also said that they are all oil wells within the territory of Rivers state and form part of Rivers State and that it is only Rivers that is entitled to receive the full allocation of the distributable revenue from the oil wells on the basis of the 1390 derivation as contained under section 162 of the 1999 constitution.
Rivers State therefore sought order of mandatory injunction directing the AGF to calculate, to its satisfaction, and refund to it all revenue that have been wrongly attributed to or paid to Imo state on account of the limit or extent of their territories, including earnings due to it from revenue derived from Akri and Mbede oil wells.
The plaintiff also sought order of Injunction directing the AGF to withdraw from circulation its administrative map 10,11 and 12th editions and to refrain from relying on any of the said maps for the purpose of determining the boundary between Rivers and Imo state.
Rivers also applied for another order of mandatory injunction directing AGF to produce administrative map bearing the correct boundary between Rivers and Imo state.
A sum of N500,000,000 naira was also sought as cost of prosecuting the case. 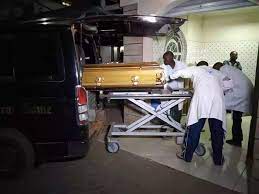 A Customary Court sitting in Choba Community in Obio/Akpor Local Government Area of Rivers State has ordered Delight Mortuary and Home Service Limited, to release the corps of Late Rose Amah to her family for burial.
The two member Customary Court, headed by the Chairman, Ndamati, in their ruling on exparte application brought by the counsel to the claimants, E. Worlu sought the order of the court for the release of the corps for burial.
Friday Amah and Hope Amah who are claimants in the suit had asked the court to direct Achor Acheru, the son of the deceased and the mortuary management to release the corpse of their sister as directed by the court.
The Tide reports that the court, following report of the refusal of the first defendant to release the receipt for the corpse of the late woman and reporting the claimants to Ogbakiri Council of Chiefs, granted the exparte order requested by the claimants counsel which the court emphasised must be obeyed. 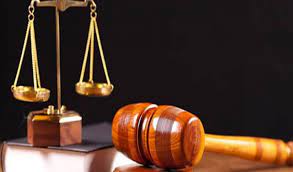 An Ikeja Special Offences Court yesterday sentenced a 23-year-old chef, Joshua Usulor, to 28 years’ imprisonment for killing a 34-year-old lawyer, Mrs Feyisayo Obot.
The chef killed the lawyer on January 26, 2019 at the Citiheights Hotel, Opebi, Lagos, where both of them lodged in different rooms.
Usulor murdered Obot, an Abuja-based mother of two, by slitting her throat while robbing her in her hotel room.
The tide source reports that Justice Oluwatoyin Taiwo sentenced Usulor after he approached the Lagos State Directorate of Public Prosecution (DPP) for a plea bargain agreement in which he would plead guilty to the crime.
The DPP had in the agreement, approved a term of 21 years’ imprisonment which would begin from the date of Usulor’s remand.
However, during Tuesday’s proceedings, the judge rejected the proposed prison term, saying that it was too lenient.
The judge said she would exercise the power conferred on her by Section 75 of the Administration of Criminal Justice Law to increase the prison term to 30 years.
She eventually reduced Usulor’s prison sentence to 28 years, following allocutus (plea for leniency) by his counsel, Mr Spurgeon Ataene.
In the allocutus, Ataene told the court to temper justice with mercy.
He submitted that Usulor was remorseful, adding that he was a young man with a promising future.
While sentencing Usulor, Taiwo asked why he killed the lawyer.
“It was a mistake, I didn’t know what got into me,” he responded.
“Your mistake has cost someone her life,” the judge said.
The Tide source reports that the prosecution led by Mrs O.A. Bajulaiye-Bishi had said that Usulor, a resident of No. 30, Fadiya St., Ketu, Lagos, went into Obot’s hotel room to rob her in order to offset his outstanding hotel bills.
Obot, an employee of an Abuja-based non-governmental organisation – Save the Children – was in Lagos to write a project management examination.
She was killed on the day she was due to checkout of the hotel.
The prosecution was still presenting witnesses in the case when Usulor proposed a plea bargain agreement.
Prosecution witnesses who testified so far are – the hotel receptionist, Ms Lateefat Adebayo; the hotel Operations Manager, Mr Olabanji Ibitunde; brother of the deceased, Mr Ige Afolabi; and the Investigating Police Officer, Insp John Babalola.
Usulor was arraigned on a count charge of murder contrary to Section 223 of the Criminal Law of Lagos, 2015.
The law prescribes death sentence for any individual found guilty of murder.