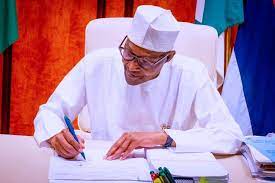 The Organisation of Petroleum Exporting Countries (OPEC), has congratulated President Muhammadu Buhari for signing into law the Petroleum Industry Bill (PIB).
The Secretary General of OPEC, Dr Mohammed Barkindo, said this in a congratulatory letter on Monday.
“I wish to extend my congratulations to you on signing into law the Petroleum Industry Bill (PIB), which marks a significant milestone for Nigeria’s oil industry and an historic achievement for your Presidency.
“With the stroke of a pen, you have inaugurated a new era for the industry following years of legislative efforts to strengthen the legal, regulatory, fiscal and governance framework of the petroleum sector.
“Indeed, the new law will enhance the Nigerian petroleum industry’s reputation, open the door to new investment and ultimately strengthen its position to meet the world’s growing demand for energy,” he said.
He added that the enactment of the legislation was timely as the investment outlook had become clouded by efforts aimed at accelerating a lower-carbon future.
According to him, the new law will help harness Nigeria’s potential to achieve its programme of raising oil production to 4 mb/d and oil reserves to 40 billion barrels, while also drawing on the country’s vast natural gas reserves to provide clean and efficient energy.
“In addition, these resources will be vital to supplying world markets with a broad portfolio of energy options, and support global efforts to alleviate energy poverty as outlined in the United Nations’ Sustainable Development Goal 7.
“The passage of the PIB by both houses of the National Assembly on 16 July and your act of signing it into law coincide with another significant milestone in our country’s history – the 50th anniversary of Nigeria’s Membership of OPEC.
“This golden moment provides a unique opportunity to reflect upon Nigeria’s rise as a global energy supplier and partner,” he noted.
The OPEC scribe said since the 24th OPEC Conference on 12 July 1971, when Nigeria was welcomed as the 11th member country of the organisation, it had symbolised Africa’s leadership within OPEC and its pivotal support for global oil market stability.
He said the past year had been a time of enormous challenges for the world, for OPEC and for each member country.
“Yet throughout this difficult period, we have demonstrated the enduring importance of OPEC and its timeless commitment to dialogue, cooperation, multilateralism and respect among all nations.
“I wish to express my sincere gratitude for your instrumental support in establishing the Declaration of Cooperation (DoC) that was agreed on 10 December 2016.
“We could not envision at that time how important this framework would become during the Covid-19-related market crisis.
“It enabled bold, swift and decisive actions to address the historically unprecedented market downfall in 2020, and it has been vital to the ongoing efforts to provide a platform for recovery and future growth,” he added.
Barkindo further commended the president for the support of the Charter of Cooperation, signed on 2 July 2019.
He noted that it had paved the way for enhanced cooperation beyond the market-balancing efforts by all countries participating in the DoC.
He said the markets continued to recognise the vital contributions that OPEC and the non-OPEC Participating Countries were making to the market’s recovery, to the global economy as a whole, and to fostering constructive dialogue.
He also acknowledged the contributions of Chief Timipre Sylva, Minister of State for Petroleum Resources, to OPEC and the DoC.