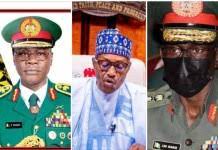 The Federal Government is to establish two additional Gum Arabic processing centres in Kano and Borno States, according to the Director of Agriculture, Federal Ministry of Agriculture and Rural Development (FMARD), Mrs Karima Babangida.
Babangida, who made the disclosure in her opening remarks at a capacity building workshop on Good Agricultural Practices (GAP) for Gum Arabic farmers, in Dutse, yesterday, added that the centres are to be established this year as part of the ministry’s efforts at improving the production of the commodity.
The director said the ministry had earlier refurbished the Gum Arabic testing laboratory at the Rubber Research Institute of Nigeria (RRIN), for quality assurance, and also established a cottage processing centre in Damaturu, Yobe.
Babangida noted that the ministry had continued to build the capacities of Gum Arabic farmers on GAP, as well as supported research and development of the commodity.
“In recent years, the ministry has made various efforts to provide Gum Arabic farmers with improved seedlings, fertilizer, herbicide, tapping knives, storage bags, hammer mill with cyclone, prushers, colour sorting machines and digital moisture metres, so as to improve its production”, she said.
She pointed out that Gum Arabic, otherwise known as ‘desert gold’, was one of the Commodity Value Chains being promoted by the ministry for its many industrial and pharmaceutical uses.
“In food products, it serves as stabiliser, emulsifier and binding agent for chewing gum, ice cream and textile industry.
“Also, the trees are important for combating climate change, mitigating desertification, reducing soil erosion and improving soil fertility,” the director added.
According to her, the ministry was mainly promoting Gum Arabic in 15 states of Northern and Central parts of the country, where the agro-ecological factors were suitable for its production.
Babangida listed the states to include: Bauchi, Borno, Jigawa, Kano, Katsina, Kebbi, Sokoto, Taraba, Zamfara, Gombe, Adamawa, Yobe, Plateau, Niger and Nasarawa.
She added that, the crop provided opportunities for trade, employment and livelihood improvement for rural dwellers, particularly women and youth, involved in gum collection and other value chain activities.
Earlier, the Permanent Secretary in the ministry, Mr Ernest Umakhihe, Mr Dipo Adegoke, the workshop was organised by the Gum Arabic Value Chain of the ministry, in collaboration with RRIN, to build the technical capacities of farmers on current techniques.
Represented by Mr Ukattah Bernard, Deputy Director, Tree Crops, Umakhihe pointed out that the global demand for Gum Arabic was valued at $373.1 million in 2018, and estimated to expand at a Compound Annual Growth Rate (CAGR) of 5.9%.
“So, Nigeria can key in into this global trend to boost our foreign exchange earnings, create employment and improve the livelihood of farmers.
“It is sad to note that Gum Arabic production is on the decline due to the insurgency and insecurity in the Northern region of the country”, he, however, said.
Also, an Assistant Director from Federal Ministry of Industries, Trade and Investment (FMITI), said the ministry had been collaborating with relevant stakeholders to develop and make Nigeria’s Gum Arabic Africa’s number one.
A participant, who is also the National Publicity Secretary of the National Association of Gum Arabic Producers and Exporters of Nigeria (NAGAPPEN), Malam Muhammad Bello, on behalf of other participants, thanked the organisers for the workshop.