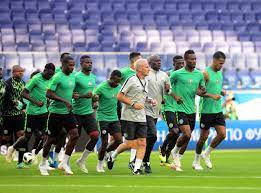 Champions Algeria, as well as Nigeria, Senegal, Tunisia, Morocco and hosts Cameroon have been named top seeds for tomorrow’s 2021 Africa Cup of Nations draw.
The ceremony billed for Yaounde Conference Centre will see the 24 participating teams zoned into six groups of four teams each as the competition gets underway in January 2022.
In picking the seeded countries, the Confederation of African Football put into consideration the August version of the Fifa rankings, the last rating released before the date of the draw.
Based on their status as hosts, the Indomitable Lions have been allocated in Pot 1, while the Desert Foxes, who emerged as champions of the 2019 edition, have been placed in Pot 2.
The Lions of Teranga, the Carthage Eagles, Super Eagles and the Atlas Lions were allocated Pot 3, Pot 4, Pot 5 ad Pot 6 respectively according to their respective rankings in descending order.
In addition, the six pots representing the groups will be labelled Groups A to F.
While Cameroon will be pre-assigned to position A1 as hosts, the remaining five teams in pot 1 will automatically be drawn into position 1 of each group (B to F). The same procedure will be repeated for the remaining pots.
The 33rd edition of the biennial African football showpiece was due to begin on January 9, 2021, however, it was pushed back to January 2022 due to the impact of the coronavirus pandemic that crippled football-related activities.
“After consultation with stakeholders and taking into consideration the current global situation, the tournament has been rescheduled for January 2022,” Caf said in a statement.
“The date for the final tournament and the remaining matches of the qualifiers will be communicated in due course.”
Before the advent of Covid-19, the competition was moved from June-July 2021 dates to January due to the unfavourable climate in the West African country during the summer months.
Nigeria last won the championship in 2013 when they silenced Burkina Faso 1-0 in South Africa courtesy of a beauty from Sunday Mba.
Gernot Rohr’s team finished third at Egypt 2019 after defeating Tunisia in the third-place play-off at Al Salam Stadium, Cairo.