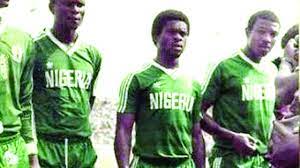 Former Super Eagles midfielder, Etim Esin, has said he is saddened that Nigerians have forgotten the sacrifice of late former international, Samuel Okwaraji, in national colours.
August 12 marked the 32nd anniversary of the player’s demise.
The late Okwaraji had slumped and died of congestive heart failure during a World Cup qualifier against Angola at the Mainbowl of the National Stadium in Surulere, Lagos. Nigeria later won the match through a late header by Stephen Keshi.
Speaking to newsmen Sundial, Esin said he couldn’t comprehend why a yearly memorial could not be organised in remembrance of such a player, who showed passion playing for his country, adding that a yearly candlelight procession to mark the date of his death would have served as a source of encouragement to youngsters in order for them to also emulate his exemplary life playing for the nation.
“Thursday, August 12 marked the date Okwaraji died playing for this country and yet nobody remembered to even celebrate such a complete footballer, who did everything at his own personal cost to represent his nation.
“I am pained because I was right there on the field the day he died and I would have thought that a yearly testimonial is organised in memory of him. Today, we still have so many players who played alongside Okwaraji and they do not even have a thought of honouring him to mark 32 years of his demise.
“Okwaraji was a player our youngsters should emulate if they are looking for a model because he played football for the national team, selflessly. This is even because some of us had to wait for our airfare ticket before honouring national invitations unlike him, who will come before it was sent because he would have arrived in the country. Other things like the match bonuses and allowances were never his prerogatives.
“He was a complete package as a footballer and a graduate of Law from the University of Rome. How many of us had university education than in the Eagles team? None,” he said, adding that he was so close to Okwaraji that he called Esin Nigeria’s Maradona.
“He used to tease me as the Maradona of Nigeria and we were the two most determined players of the squad just to make sure that Nigeria qualified for the World Cup because we were resolute. But like they say, man proposes and God disposes.
“As soon as Okwaraji died, some of the players, who were supposed to be in Cameroun for the last group qualifier to Italy 1990 World Cup, did not agree to travel with us as they were afraid that another player may die just like Okwaraji did. So, when you see all these young players who want to play for England, will you blame them?
You can’t blame them because they know that they don’t have future here because when they retire, there will be no benefit for them! How many caps did John Fashanu have playing for England? But he still collects some benefits from the player’s union.

because he wore that Three Lions shirt, which is not a mean feat anyway.
“I tried to talk to one of us in government, but he was not ready to listen to me. Even though he was not my teammate, can’t he arrange something courtesy of the presidency in remembrance of Okwaraji. Is that too much to ask for a late colleague who died sacrificing everything for this country? On August 12, I was sad because I know what would have happened were Okwaraji a European.
“Even up till the time his mother died, nothing befitting was done for her. They that are alive should just thank God for life and not complain. Is it this attitude of ours in the country that will encourage a player of Nigerian descent abroad to come and play for us? And someone will now say I should not talk when I was on the field on the day the incident happened. This is so sad and pathetic,” he stated.