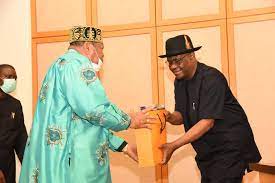 Paramount ruler of Ikodi Community of Ahoada West Local Government Area of Rivers State, HRH Jonathan Ayonoadu, has commended the State Governor, Chief NyesomWike for his development projects in the state.
The monarch made the commendation at his palace in the community during a chat with newsmen.
The Tide reports that Ayonoadu was recently installed as the Okilomaken(paramount) ruler of the ancient community.
He stated that upon assumption of the seat of power as chief executive of the state, Governor Wike has performed excellently.
The royal father lauded the governor for upgrading the stool of the Engenni Kingdom monarch to first class, just as he restated that the member representing Ahoada West Constituency in the Rivers State House of Assembly, Nwanaka Okpokiri has also touched Ikodi with the execution of an infrastructural project.
The Tide also gathered that the royal father reiterated his resolve towards ensuring peace in the community,just as he promised to work towards the development of Ikodi through the dedication of the community to God.
“We’ve dedicated Ikodi to God. We believe that with the dedication of this community to God,government and every other person with good intentions will remember us.
“The Rivers State Governor, Chief Nyesom Wike has done well. Our community now has a befitting city hall,courtesy of the member representing us in the state House of Assembly.
“We also wish to wholeheartedly thank the governor for upgrading our stool, the Engenni Kingdom stool, to first class”, the monarch said.
Meanwhile, the Paramount Ruler has taken a swipe on the multinationals operating in the Niger Delta.
He tasked the Shell Petroleum Development Company, SPDC and other oil companies operating in the Niger Delta to give their host communities and their areas of operations a facelift, saying no hungry men can protect their facilities against vandalism in the Niger Delta region.
“If their facilities must be protected, then, they have to do more towards the development of their host communities and the Niger Delta region. For Ikodi, we’ve not seen anything from them as an oil bearing community.
“But if you go to Abuja, you would be surprised of the level of development. Infact, Abuja was developed with accruals from our Niger Delta oil revenues”.