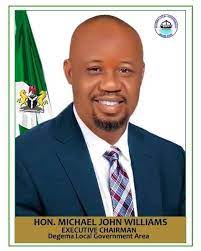 The Chairman of Degema Local Government Area, Hon. Michael John Williams, has led a team of medical personnel to the ancient Bille Kingdom in Degema Local Government Area.
The visit was in response to the perennial outbreaks of Cholera and other waterborne diseases plaguing the kingdom periodically.
Speaking at the Palace of the Amanyanabo of Bille Kingdom, King Igbikingeri Nicolas Cornelius Herbert, the council Boss stated that the visit was to have a background information of the situation, with a view to permanently addressing it, to forestall a future recurrence.
He said, following the outbreak, State Governor, Chief NyesomWike, immediately directed the ministry of health and affiliate agencies to quickly respond to the health crisis and bring it under control.
Hon. Williams stated that the council would give all necessary support to the experts from the health sector to ensure that the issue did not reoccur, assuring that the state government in conjunction with the council will do all it could to restore normalcy in Bille.
The chairman, who also commended the people of Bille for making good use of the Surveillance boats, procured by his administration to secure their waterways, further pledged the council’s support to undertake its maintenance for a sustainable use of the facility.
In his speech, the Amanyanabo of Bille Kingdom, King Igbikingeri Nicolas Cornelius Herbert, expressed the appreciation of the Kingdom to the chairman for his continued love and affection for his people.
He noted that Bille was the first community in the local government area to feel the impact of the Chairman, through the donation of fully equipped surveillance boats to curtail the security challenges experienced by commuters along the Bille/Port Harcourt waterways.
While thanking the state government for its swift response to the outbreak of the disease through the ministry of health, the Royal Father appealed for more drugs to be made available in the interim, noting that the ones earlier sent were very effective in containing the effect and spread of the disease.
He appealed to the government to build a bigger water treatment plant for Bille Kingdom, as the one they currently have was too small and the treatment process, equally too slow, thus, inefficient in serving the area.
The second class traditional ruler also appealed to the chairman to support the Bille security architecture by taking over the responsibility of its logistics, as the kingdom alone could not shoulder the huge responsibility.
Giving a vote of thanks on behalf of the Bille Chiefs’ Council, the Spokesman of the Council and former Caretaker Committee Chairman of DELGA, Hon. Boma Dappa, lauded the Council boss for always prioritising the issues of Bille, noting that the kingdom had never had it this good in the history of local government administrations.
While praying God to continually grant the council’s chairman good health and more wisdom to positively impact lives, Hon. Dappa pledged the unalloyed support of the entire Bille Kingdom to the local government area’s chief executive.