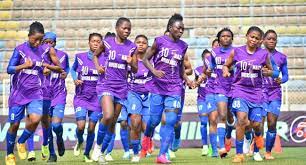 General Manager of Rivers Angels FC of Port Harcourt, Matilda Otuene, has said that the club will sign more players, as they continue preparation for this year’s CAF Women’s Champions League.
Otuene disclosed this immediately after the unveiling ceremony of two newly signed players on Friday, at the Ministry of Sports, Port Harcourt.
According to her, they want a solid squad heading to Egypt. “We are definitely going to bring in a few more players in the coming days,” the GM said.
“We want a situation where our bench will be as the starting lineup. The   current Covid -19 situation in the  world   could affect your plans, if you record-ed positive cases, just like we saw in  Abidjan and that alone affected some  programme.
“So we have, like, six more signings to make and they would be unveiled next week, thereabouts,” she added
Rivers Angels have unveiled two new players that will represent the club in the 2021/2022 football season. The unveiling ceremony took place on Friday,  at the Rivers State Ministry of Sports, Port Harcourt.
Chiamaka  Okwuchukwu (Royal Queens) and Cameroonian International, Brigitte Omboudou (Amazone FAP FC) were the two players unveiled to beef up the team ahead of preparations for the upcoming CAF Women’s Champions League in Egypt and the Nigeria Women Football League Premiership next season.
Omboudou, 26, is a Silver medalist at the All African Games in Brazzaville, Congo and a former Delta Queens defensive midfielder having spent one season with the Okowa girls (2017-2018) before heading back to Cameroon.
Okwuchukwu, 16, is Royal Queens’ top striker and had an amazing season with the side before joining Delta Queens on a short-term loan for the NWFL Super 6 in Ijebu-Ode, where she scored 4 goals in 5 matches.
Speaking of her expectations with her new family, the 16-year old said she wanted to win titles with Rivers Angels.
Asked if she was going to find it difficult breaking into the team’s starting XI, Okwuchukwu said she has all it takes to break into the squad.
“I have the mindset to get whatever I want, so I’m not worried in any way,” she said. No doubt the team has a good squad but I am ready to take up the challenge.
“Expect the best from me because I’m here to make a name for myself and the team. I want to give out my best and score more goals.
“I feel very excited joining this team and I want my presence to bring forth more wins for the team,” added Okwuchukwu.
Rivers Angels will compete at the maiden edition of CAF Women Champions League later this year in Egypt after booking qualification at the just concluded WAFU B Championship held in Abidjan, Côted’voire.