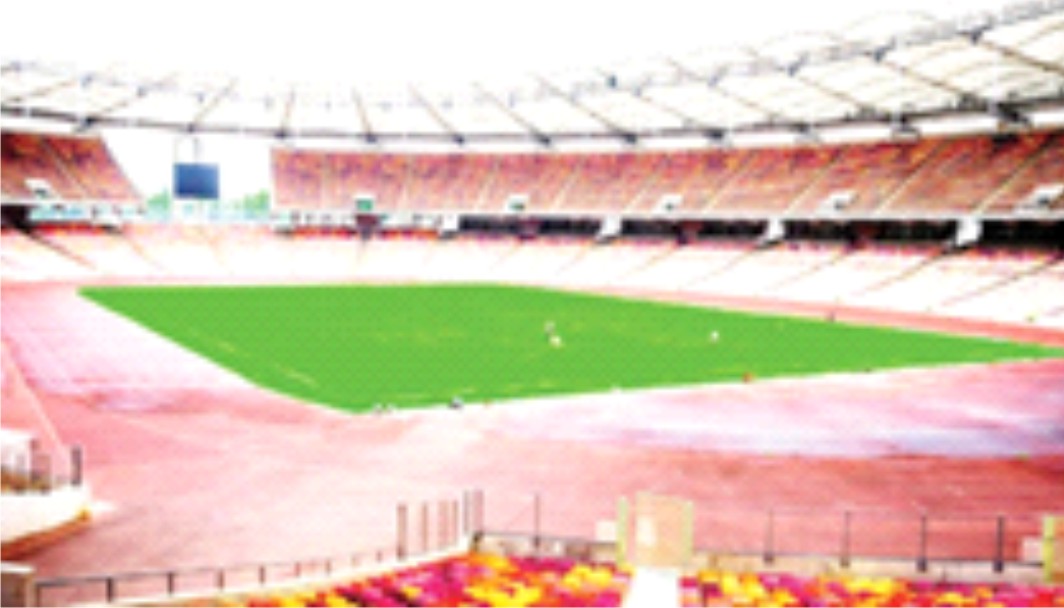 The Minister of Youths and Sports, Sunday Dare, has assured that football matches would soon return to the Moshood Abiola National Stadium, Abuja, as the stadium now wears a new look following its renovation by the ministry.
Formerly known as the National Stadium, Abuja, it was renamed after M.K.O. Abiola, the presumed winner of the June 12, 1993 presidential election, in 2019.
The stadium, which was built at a whopping $360 million to host the African Games in 2003, had deteriorated while the environment looked unkept and rough with grasses growing all over the walkways and parking lot.
The Abuja stadium has been undergoing rehabilitation with re-grassing of the main pitch, replacement of the scoreboard and vandalised cables restored, which ensures the facility is well lighted at night to enhance security, all made possible due to the intervention and collaboration with the Dangote Group.
In a statement by the ministry and made available to Tidesports source, the minister assured that the work was almost at the completion stage.
“Football action will soon return to the main bowl of the newly renovated Moshood Abiola National Stadium, Abuja, as the pitch is now lush green and the scoreboard functional,” the statement reads.
“The new-look of the Stadium was made possible by the Minister of Youth and Sports Development, Sunday Dare, after he made a plea to business mogul, Alhaji Aliko Dangote, who agreed to bankroll the rehabilitation of the stadium.
“Prior to the intervention, the Moshood Abiola National Stadium had deteriorated to the extent that the pitch had become an eyesore and the scoreboard dysfunctional.
“The rehabilitation is in fulfilment of the mandate of the minister to renovate existing infrastructures and develop grassroots sports.”
“The adopt-a-pitch initiative has resulted in the rehabilitation of the Moshood Abiola National Stadium.
Garba Lawal said, “A fantastic piece of news because this is the stadium we opened in 2003 and I remembered we lost 3-0 against Brazil, that was the day the stadium was opened and I played full minute that day.
“It is an awesome ground and I’ve always wanted to see the Eagles in Abuja and Lagos. The minister did a wonderful job, the ministry, federal government and everyone involved did well to see that the stadium is ready.
“The most important thing now its the maintenance.

of the stadium which has always been our problem.”
Mutiu Adepoju added, “It is a good thing that our stadiums are having good shape especially the national stadium in Abuja.
“It is great news and one need to be happy about it and such developments are what we are looking for because this is what is good for our sports.
“Kudos should go to the minister for the good job and I am happy that the stadium is ready after renovation.”
The statement also revealed that there are plans to rehabilitate the Obafemi Awolowo Stadium, Ibadan, Oyo State, through a private-public partnership model.