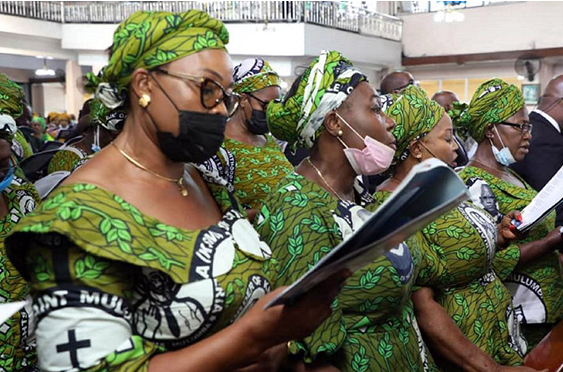 As part of the ongoing 69th convention of the Redeemed Christian Church of God (RCCG), over 24,000 ministers were ordained to swell the number in the fast growing ministry.
The ceremony, which was presided over by the General Overseer of the ministry, 79-year old Pastor Enoch Adeyare Adeboye, produced a total 10,806 deacons and deaconesses as well as 4,726 assistant pastors made up of male and female ministers.
The newly commissioned ministers are expected to help the pastorate in its quest to move the church forward to greater heights of glory.
A statement from the office of Assistant General Overseer in charge of Administration and Personnel, Pastor Johnson Odesola, yesterday, confirmed that the figure of deacons, deaconesses as well as the assistant pastors were ordained as part of workforce of the fast growing church.
Another 2,231 pastors will be added to fast growing workforce on Saturday as the convention winds to a close after six days of a busy schedule for the leadership of the church which was flagged-off by the 79-year General Overseer leading a prayer walk from the old auditorium to the church’s 3kilometres by 3kilometers auditorium, a distance of over three kilometres with so many falling by the wayside.
Earlier during programme, the General Overseer, Pastor Enoch Adeboye, had recalled a hilarious encounter he had with an old-time girlfriend, who he narrated, he did virtually everything with.

Adeboye revealed that when he was yet to give his life to Jesus Christ, he had so many girlfriends, but that there was a particular one he did everything with.
He said: “Then, we separated. She went her way; I went my way. We didn’t see for years, and she got married, and I got married.
“In the meantime, I got born again. When I was working at the University of Ilorin, looking after our little church there, in the meantime, they transferred her husband also to Ilorin.
“She had given birth to a child that was born lame. Someone told her there is a pastor up there; take your child to him. If he prays for the child, the child will walk. So, she came to the mission house.
“She saw some people at the veranda, and said ‘I want to see the pastor’. They said he is inside. And then, she came in and saw me. We greeted. Old flames! How are you? Long time, no see! Where have you been”?