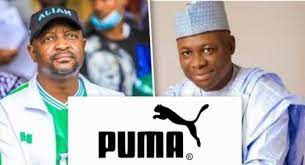 German sportswear manufacturing giants, PUMA ,will sue the Athletics Federation of Nigeria and Federal Ministry of Youth and Sports.
The sportswear manufacturer had terminated the four-year contract in a letter dated Wednesday, August 4, 2021, and signed by the company’s director Manuel Edlheimb.
Tidesports source gathered that the AFN under the leadership of Ibrahim Gusau had entered into a controversial $2.76m deal with Puma on July 24, 2019, in Doha.
The deal led to a major crisis that split the athletics body into two factions, with both Gusau and Adeleye accused of sidelining other members of the board during the signing of the deal.
The deal, signed by Gusau-led AFN,  was due to expire in 2022.
Part of the contract is that PUMA will supply apparel to all age categories to Nigeria’s Athletics team for four years at no cost.
In addition, gold medalists at the Olympic Games will earn $15,000, silver medalists will get 5,000 while a bronze medal will fetch athletes wearing the PUMA apparel at the games $3,000.
PUMA said Nigeria breached provisions of the contract by not wearing the kits at the Tokyo 2020 Olympics.
This, the sportswear manufacturer, said is against clauses 9.2 and 7.3 of the Agreement.
Tidesports source also gathered that PUMA officials have got in touch with officials of Gusau-led AFN informing them of an intention to sue.
A source said that the sports ministry would be made a party to the suit “because they issued a memo granting AFN permission to seek sponsorship. PUMA sees AFN as a representative of Nigeria with that memo. It gave them confidence that AFN had approval. They also claimed that as of the time of signing the contract, the parties involved are recognised by law and FG, and there was no faction to warrant suspicion. They believe an administration is a continuum and the agreement has government backing.”
The AFN First Vice President, Sunday Adeleye, confirmed this while appearing on Arise TV as a guest yesterday.
While displaying evidence and documents showing the FG’s approval for the federation to seek a sponsor, Adeleye said, “The contract is a non-disclosure one. It is between PUMA and AFN with FMYSD’s permission. We warned that this may lead to litigation and wrote to all parties involved, including finance and justice ministries.
“We are sure that PUMA will go to court on this matter. Their officials have called that they are sending documents from their legal department. We wrote the minister on the implications for Nigeria. This won’t make other companies deal with Nigeria.”
He also argued that Gusau-led AFN did everything possible to ensure that the image of the country is protected.
On why the kits were kept in a store, he said, “Our AFN has been barred from using facility in the stadium and we needed to run the activities of the association. We have a store and office that we run. The constitution didn’t say our office should be in the stadium.”
Asked he would take responsibility for the termination of the contract, Adeleye said, “We should be awarded because we are patriotic. FG asked federations to look for sponsors (before Sunday Dare). This contract precedes him. They are aware of the contract.
“We worked with instruction. We looked for a sponsor so that the burden can be taken off the Federal Government. The sports ministry should be sanctioned. We need a shake-up in the sports ministry.
“The problem is the minister and sports ministry under his administration. Our problems have never been this worse. Federations have issues but not to this extend. Despite a court order, the minister is resolute in destroying some people. We gave the kits out, the ministry said they were not going to use the kits.”
It was learnt that several efforts were made to give the athletes the PUMA kits, including shipping bags of kits with 40 items each to Tokyo through the Nigerian Embassy in Japan but to no avail.
Tidesports source reports that the Department of State Security last year cleared Gusau and his vice president Sunday Adeleye over corruption allegations levelled against him by the sports ministry, The .
The sports in 2020 ministry petitioned the DSS over the AFN’s partnership deal with Puma to kit Nigeria’s track and field teams until 2023.
The DSS, in a response to the sports ministry’s petition titled “Re: Federal Ministry of Youth and Sports Development (FMYSD), Athletics Federation of Nigeria (AFN) and Alhaji Shehu Gusau”, dated September 3, 2020, and signed on behalf of the Director General of the DSS by Bello Mustapha, was received on September 4, 2020 by the sports ministry.