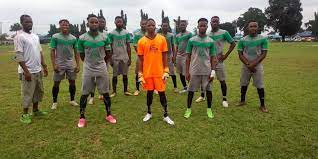 Oginigba-based Rocks FC has bought over the franchise of Abali United who play in the Port Harcourt City League.
Rocks FC, in a statement said the agreement was sealed after a thorough discussion between their management and the Port Harcourt City League, PHCL board.
The Chairman of Rocks FC, Charles Echendu, led the club’s negotiation team.
After successful completion of the takeover, Coach of the side, Ojeashi Emmanuel Ndubuisi said that the club was aware of the challenges of taking up the franchise of Abali United and are prepared for the task ahead.
“Since we understood the massive developmental project by the Port Harcourt City League board in 2020, it has always been our desire to be part of the vision, a development that the football stakeholders should all support,” Ndubuisi said.
Following this development, Rocks FC, a very formidable grassroots team and one time Rivers Super League champion will join other elite grassroots teams in Port Harcourt for the 2021 season.
They will continue from week seven, after formal registration of the club following the take-over.
Rocks will make their debut against Ambassadors Sports Academy in a match day 7 group B encounter at NAF Base, August 2, 2021 before continuing their fairytale in the League Cup a week later against Salvation Boys, another team from the main town axis.