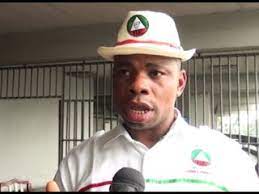 The President of Muaythai Federation of Nigeria (MFN), Comrade Paul Egonu, has charged team Nigeria at the ongoing Olympic Games in Tokyo, Japan to make the country proud by winning laurels.
He further tasked the athletes to  replicate the impressive performance of past Nigerian Olympians, saying he has no doubt of their potentials.
Comrade Egonu, gave the charge in a telephone interview with Tidesports, yesterday.
“I urge team Nigeria to promote the ideals of the Olympics. I know the games is all about fair play, honesty, teamwork, respect and friendship,” Comrade Egonu said.
He revealed that the International Olympics Committee (IOC) has included Muaythai as one of the sports to compete for in Olympics.
According to him, the Federation will start from now to groom fighters that can make the country proud in the next Olympics Games.
“We are assure the country that  Muaythai in Nigeria will leave no stone unturned to  present talented athletes, who will do the nation proud at the next edition of the Olympics.
The Muaythai family is happy about this deveploment, that we can now compete at the world multi sports competition. We will not relent to give out our best to qualify for the games.
Honestly, we  commend the efforts of the International Muaythai Federation for this feat which will go a long way to promote the sport globally,” he stated.
The number, Mauythai man in the country, equally disclosed that the sport will be one of the demonstration sports at the National Sports Festival (NSF) in 2022, billed to hold in Delta State, as a letter to that effect was given to the Federation by Federal Ministry of  Sports and Youth Development, April this year.
Comrade Egonu, used the forum to   commend  the Minister of Youth and Sports Development, Sunday Dare, for effectively coordinating various sporting federations in preparation for the games and securing spoonsorship for the games.

We Won’t Give Up On Playing For Nigeria – Ogwumike Sisters