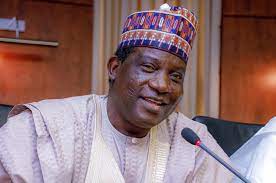 Governor Simon Lalong of Plateau State has urged the 2020 Christian pilgrims to Jordan to pray for the nation to overcome  its security challenges while in the Holy Land.
Lalong also urged the pilgrims to pray for the improvement of the nation’s economy.
He made the call while officially flagging off the 2020 Christian Pilgrimage last Saturday at Yakubu Gowon Airport , Heipang near Jos .
“You are embarking on this spiritual exercise at a time when our nation is in dire need for prayers and rejuvenation because of the myriad of security and economic challenges we are facing.
“ It is very important that you present our nation before God and solemnly reflect on your role as believers in building a better Nigeria.
“Indeed, when we turn to God with a sincere heart, our land will be healed. Please pray earnestly for Plateau and Nigeria while you are there,” he said.
The governor also urged the pilgrims to see the trip as an opportunity to develop themselves spiritually, and have a closer relationship with God.
He described the event as historic, as it was the first time the state was hosting the departure of intending pilgrims to the Holy Land.
Intending pligrims from Plateau, Bauchi and Gombe states were transported from the Yakubu Gowon Airport.
He said the event was an attestation of the restoration of peace in Plateau and its place as a tourist site.
“It reaffirms the fact that Plateau State is back to its pride of place as the Home of Peace and Tourism.
“Secondly, it shows that the efforts of our Rescue Administration in restoring peace, confidence and stability are yielding the desired results,” Lalong said.
He said even though the initial plan was for direct airlift of pilgrims from Jos to Jordan, which was not actualised, their airlift to Abuja would ease the rigours for intending Pilgrims of traveling to their designated take off points from their states.
“Hopefully, all the outstanding issues should be sorted out before the next exercise to make the dream of direct flight come true,” he said .
He expressed optimism that the development would herald the Yakubu Gowon Airport to international service, considering that it had already been designated as one of the cargo airports in the country.
The governor lauded Rev.Yakubu Pam, the Executive Secretary , Nigeria Christian Pilgrim Commission(NCPC), for seeking holy sites in Jordan as an alternative to Israel before its lockdown directive is relaxed .
“I am told that a total of 600 intending pilgrims from Plateau will be performing the pilgrimage during this exercise.
“Out of this number, 200 were carried over from those that were not airlifted to the Holy Land to participate in the 2019 pilgrimage, as a result of the outbreak of COVID-19 pandemic,” he said.
In his remarks, the Chairman, Senate Committee on Foreign Affairs, Mr Adamu Bulkachuwa,urged the Pilgrims to strengthen their spirituality from the exercise, saying ‘Do not return the same’.
Bulkachuwa, who was  represented by Sen. Nora Daduut, the Senator representing Plateau South Senatorial District, prayed for the pilgrims’ faith to be deepened, while urging them to pray for the country and the world.
2,500 Nigerian pilgrims will perform the 2020 pilgrimage in Jordan.
Special Prayers were conducted for the intending Pilgrims by clerics, led by the President of the Christian Association of Nigeria, Rev. Samson Ayokunle, who is also the spiritual leader of the Pilgrimage.