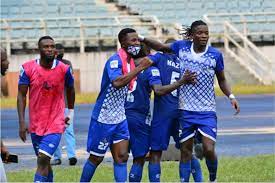 The Captain of Rivers United FC of Port Harcourt, Festus Austin, has called on the League Management Company (LMC) to apply  the rules of LMC effectively, as Jigawa Stars last Wednesday fielded ineligible player, Richard Christopher, against his team in their week 34 game in the ongoing Nigeria Professional Football League (NPFL).
He stated that Jigawa Stars were  expected to lose three points and three goals, as they included a suspended player in their match list, saying that for the league to maintain its integrity and credibility, LMC should do the needful.
Austin made the call  in a telephone interview with Tidesports, yesterday.
The LMC has written a letter, dated Sunday 18th July , 2021, shortly after their week 33 game against Enyimba, notifying Jigawa Golden Stars management that Christopher jersey No. 8, had backed five yellow cards in the season, consequently, will not be eligible to play the match against Rivers United FC of Port Harcourt.
In LMC framework, it was clearly  stated that: “If it is established that, a team intentionally featured a player who had earlier received five  yellow cards or red card before the match in question, the affected team will lose three points, three goals to its opponent.”
According to him, hence Jigawa Stars, have deliberately disobeyed the rules, LMC should no distant time award the points and goals to them as stipulated in the  LMC guidelines.
“ I want to say that it is obvious that our opponents, Jigawa Stars have failed the rules, so the next thing for LMC to do is award us the three points and goals.
I believe that the  right thing will be done in no distant time,” Austin said.