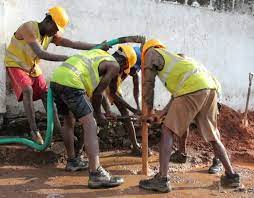 Impressed by the efforts of the Nigeria Police, particularly in Ogoloma Community in Okrika Local Government Area, in Rivers State, the community has lauded the Divisional Police Officer (DPO) in charge of the area, CSP Okoro Ikechukwu.
The commendation was contained in a statement signed by the Chairman and Secretary of the community, Chief Kunumgbe Martins and Levi Alalibo respectively, which was made available to The Tide yesterday.
According to the statement,  the commendation was sequel to the DPO’s contributions towards the development of Ogoloma town, particularly the recent sinking of borehole water for the community.
“Our appreciation is to reciprocate the good gesture of CSP Okoro Ikechukwu, who has contributed immensely to the development of our community.
It is rare for the Police to do community service, honestly this is highly commendable. We are really proud of you,” it stated.
The statement explained that Ogoloma community has accommodated other  officers, but they  have seen CSP Ikechukwu as a distinct Police officer with the zeal to bring  peace outside his  primary duty.
“Your closeness to the people of Ogoloma and the fact that you have assisted them with borehole drinking water is an indication that you are a good man”, it further stated.
Responding, CSP Ikech-ukwu  said rendering assistance  aside security duties was borne out of passion for doing good which gives him happiness.
He expressed joy for the honour accorded him, saying that he returns all the glory to God.
The DPO explained that  he ran into Ogoloma community during his routine visit to communities under his watch, adding that the motive of the visit was to sensitise the youth against illicit drugs, cultism and other social vices.

“In course of the sensitization programme, I discovered that the  people had challenge of drinking water and I decided to assist them with the  help of God”, CSP Ikechukwu said.

He further  urged the people to cooperate with the police in the area of information , surveillance and intelligence reports.