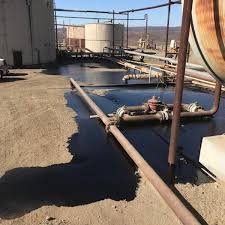 Nigeria suffered losses amounting to 21,291.673 barrels of oil, an equivalent of 3,364,084.375 litres, due to spill in 2020, according to the latest data obtained from the National Oil Spill Detection and Response Agency (NOSDRA).

NOSDRA, while noting that the spill could be attributed to several factors, explained that the bulk of the spill was caused by sabotage and theft.

According to the agency, much of the spill in 2020 was recorded in February, when 6,327 barrels were lost, followed by 4,676 barrels recorded in January, while July took the third position by recording 2,174 barrels.

Interestingly, in 2019, February also recorded the highest spill with 9,148 barrels, followed by June with 6,404 barrels, while January made the third position with 5,559 barrels.

For barrels of oil that occurred due to operational issues, March had the highest with 323 barrels, followed by May with 235 barrels, while November had 116 barrels.

Similarly, July, February, had 92 and 45 barrels, respectively, while January and October had 40 barrels each.

Coincidentally, in 2019, March also had the highest number of barrels spilled with 2,179, followed by September, which recorded 1,452, while May came third with 610 barrels.

According to NOSDRA, there were around 370 publicly available oil spill records in 2020, which were attributed to about 24 companies.

Prominent among the companies was Shell Petroleum Development Company (SPDC), which had 186 spills and 13,280 barrels attributed to it.

This was followed by Nigeria Agip Oil Company (NAOC), which had 35 spills with 695 barrels.

Though Mobil Producing Nigeria and Nigerian Pipelines and Storage Company had zero barrel recorded in their names, they had four and seven spills, respectively.

Esso Exploration and Production Company, Neconde Energy Limited, Kamlik Nigeria Limited and Infravision Limited had one spill each worth zero, 13, 3 and 38 barrels, respectively.

NOSDRA also explained that oil spills could be caused by breaks in ageing or poorly maintained infrastructure, accidents, vandalism and other incidents.

It noted that in the past 10 years, a number of spills have also been caused by oil theft, also known as bunkering.

This is where oil is stolen from pipelines and then shipped to local or international markets.

There has also been an increase in artisanal refining when camps in the mangrove refine crude for local or other needs.

These are unregulated and so can cause serious pollution.

According to NOSDRA, there are no legally binding regulatory penalties or fines for oil spills in Nigeria.

Currently oil companies are required to fund the clean-up of each spill and usually pay compensations to local communities affected if the spill was the company’s fault.

A recent court case related to repeated oil spills in the Bodo area of Ogoniland argues that a failure by companies to adequately protect pipelines from vandalism or theft, or continuing to operate when vandalism or theft is rife, constitutes culpability on behalf of the pipeline operator.

NOSDRA also noted that there are many issues relating to reporting and cleaning up oil spills in Nigeria, including corruption, and insecurity.