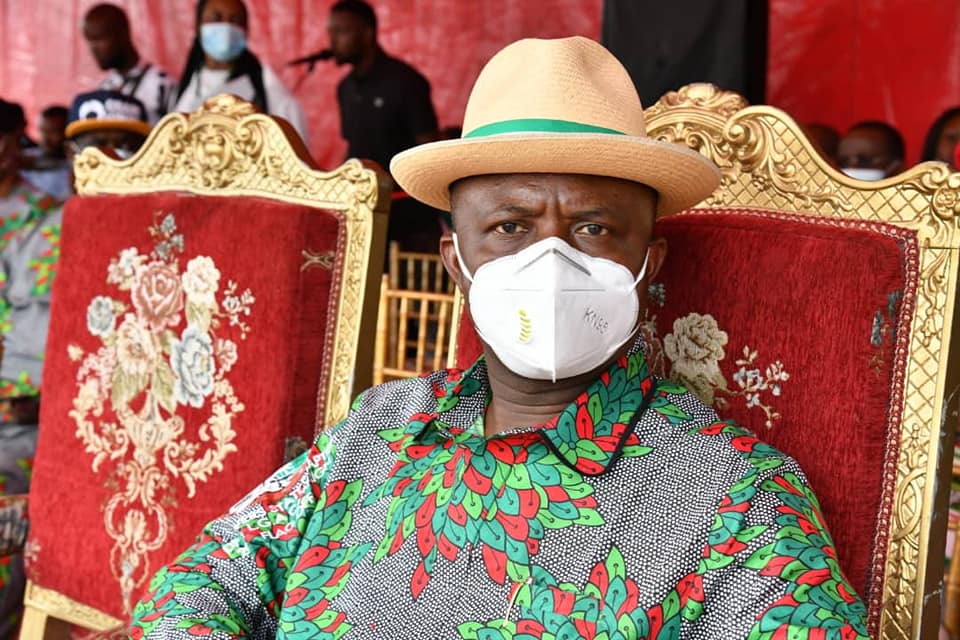 The Rivers State Governor, Chief Nyesom Wike says nobody will be allowed to use ethnicity to set the state backward.
The governor made the declaration while speaking at the flag-off of the reconstruction of Rivers State Government House Jetty at Marine Base Waterfront in Port Harcourt, last Wednesday.
Wike noted with dismay the destruction of the rich tourism opportunities, offered by the beautiful marine features around the area, by the residents of shanties at Marine Base axis of Port Harcourt, the Rivers State capital.
“What has set Rivers State back is ethnicity. What has made us not to progress so far is that we blindfold ourselves not to know the truth.
“If we have a place like this, do you know how many people will like to come to Rivers State? Today, we are talking about tourism, and how can you say that here should be a tourism centre when you have all these shanties around.
“Let me say it and I don’t care what anybody will say, nobody will set Rivers State backward”.
Speaking further, the governor noted how the residents encroached on the land where the Government House facility was located.
According to him, it took security personnel to give the trespassers a good fight before evicting them to clear the premises for the flag-off ceremony.
Wike explained that the shanties that have littered the stretch of the Marine Base Road will not be allowed anymore.
“Let us tell ourselves the truth: If I knew how this place is, I will not have agreed for this project to go on. Look at the shanties, and you’re telling me that the Government House Jetty is where you’ll have Governor’s Lodge.
“Who will come to stay here, to do what? How long can we continue to do this? Which meaningful person will drive on this road in the night without criminals blocking you?”
The governor said he would invite the Secretary to the State Government (SSG); the House of Assembly member representing Port Harcourt Constituency 2, Hon. Tonye S. Adoki; and Port Harcourt Council chairman for a meeting to deliberate on how to sanitise Marine Base.
Performing the flag-off, the Rivers State Chairman of the Peoples’ Democratic Party (PDP), Amb Desmond Akawor, noted that if there were no projects, there won’t have been need for the several persons invited to perform either a flag-off or inauguration in the state by the governor.
According to him, the Government House Jetty is an addition to other completed projects within Government House, like the clinic and administrative building, for improved medical services, increase personnel efficiency and enhance the aesthetics of Government House.
“You have built a state-of-the-art clinic. You have built a new administrative block. Behind the Government House, you’ve development the fauna and flora. These can also be appreciated when you hear the whistles and chirps of the birds.
“Today, we are at the Government House Marine Jetty, an addition you’ve made to all the features in Government House. This is one jetty that defines the amphibious nature of our state”.
Providing the description of the project, the Special Adviser on Special Projects to the Governor, George-Kelly Alabo, said the jetty could be likened to a wharf.
According to him, the project has a Landing Jetty, a 170-metre reinforced concrete shoreline protection.
Alabo explained that the choice of reinforced concrete was because it will prevent corrosion from oxidation that was associated with using steel piled, despite the fact that it could be catholically protected.
“There will be three major buildings. One, will be a 2-storey building that will house 20 security personnel, all in suite; the Navy, especially.
“We are also going to have another 2-storey building which will serve as a dockyard. In it, we are going to have a restaurant, conveniences, small conference hall, a kitchen and a lounge.
“Then, we are also going to have the Governor’s Lounge. That is going to be for the governor’s convenience anytime he comes to use this wharf.
“Finally, we are going to have two floating rams to make landing very easy. One will be exclusively for the governor, one for the public. We have about 11,000-square metre of land, which is approximate 23 plots of land. We will have reinforced concrete pavement to serve as the car park.”