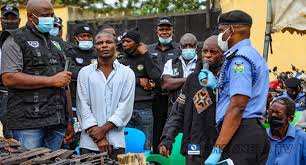 Rivers State Police Command has arrested 36 suspects in connection with various criminal offences in the State and recovered several arms and live annunitions.
Parading the suspects on Friday, at the Police Headquarters, Moscow Road, Port Harcourt, the Commissioner of Police, Eboka Friday, said the arrests were made through the aid of technical intelligence and tip off  at various Local Government Areas in the State.
According to him, the Command also rescued six kidnap victims utilies two vehicles, were recovered within the period under review, adding that the command will continue to do her primary responsibility to bring crime to the bearest minimum.
“ You will recall that when I assumed duty as Commissioner of Police of the State mid February this year, I solicited the support of all and promised to serve the good people of the State conscientiously.
The people responded positively and we have recorded significant achievements too numerous to enumerate. You will agree with me that cultism, kidnapping and other violent crimes have nosedived” CP Friday said.
He used the forum to revealed that the recent video that went viral on social media showing people prostesting in Oyigbo Local Government Area, as a result of the arrest of Nnamdi Kanu, the leader of the proscribed Indigenous People of Biafra (IPOB)  did not happened in the State.
The Police Commissioner explained that after the command analysed the video they discovered that it was an incident that  happened long ago somewhere that the perpetrators just did voice over to look as if it happened in RIvers State.
“ The video that was making the rounds recently, after analysing the video we discovered that the protest was not in RIvers State. People use voice over to look as if it happened in RIvers State” he stated.
CP Friday, equally, thank journalists in their continual partnering with the Police to provide security and safety in the State, saying that with the support of every peace loving person the relative peace in the State will be sustained.