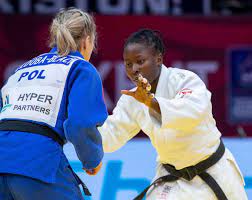 Nigerian judoka, Enku Ekuta, says she cried when she lost the chance to be at the Tokyo 2020 Olympic Games, after losing at the African Senior Championships in Dakar, Senegal.
The 21-year-old said inadequate preparation by the Nigeria Judo Federation (NJF)made her lose points, which ended her dream of qualifying for the Olympics.
According to her, if she had qualified, she would have emulated her mother, Catherine, who represented the country at the 2004 Games in Athens.
Ekuta was on the verge of qualification for the Games, but missed out after failing to secure a podium finish in Dakar
Tidesports source gathered that Ekuta  had, however, put the disappointment behind her.
“I did not win a medal in the last competition I went to,  so I lost the continental quota. There was the option of a wild card, but it was late already. After I lost the continental quota, I just gave up because that was the last competition that I had before the Olympics,” Ekuta said.
“I felt very bad because I really worked hard for this. But I don’t feel bad any more because I know that if we had started my qualification on time, all these wouldn’t have happened. So, next time, thankfully I have a sponsor, I am going to start competition proper on time and I won’t lose anything.
“Our federation president started sponsoring and that was the end of 2019. In 2020, there was no competition till the end. When I lost my fight, I was really sad. I cried there (Dakar) when I lost the fight because I knew what had happened.
“But it’s not the end of the world, there is still 2024 and there is the Commonwealth Games next and the African Games next year.
“I am really disappointed about the lack of support, but I reserve my com-ments.”