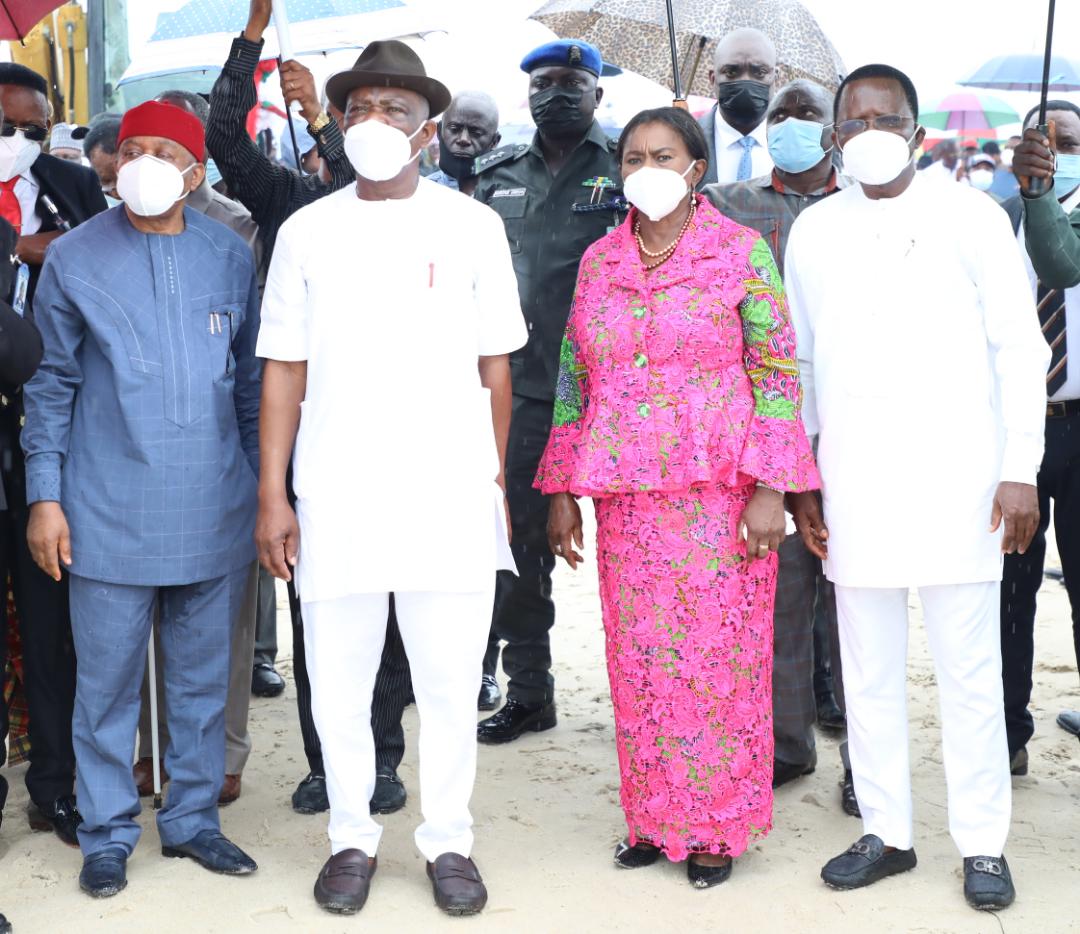 The Rivers State Governor, Chief Nyesom Wike, says governors and others defecting from the Peoples Democratic Party (PDP) to the ruling All Progressives Congress (APC) lack conscience and cannot be trusted.
The governor said it was ludicrous and hypocritical of the APC to demonise the PDP, and then, turns around to poach members of the same party.
Wike, while speaking at the flag-off of Woji-Aleto-Alesa-Refinery Road and bridge with spur to the East-West Road at Woji town, yesterday, asserted that those defecting from PDP after riding on the back of the party to power, have proven that they were treacherous.
“People who could not win ordinary election. The party used technicality and went to court, and got victory. Now, they say they are leaving the party. Hopeless, shameless human beings. People who have no conscience.”
Wike accused the APC- led Federal Government of blackmailing and coercing some PDP governors and members to join the ruling party, and reiterated that no amount of blackmailing or intimidation would make him leave the PDP.
“Bring everything you have against me, I will not join you. Rivers State will not join you. Even if it is only Rivers State in this country, we will continue to be Peoples Democratic Party.”
The governor, however, took a swipe at the former Director General of Nigerian Maritime Administration and Safety Agency (NIMASA), Dr. Dakuku Petersidel, for lying that the Federal Government paid the Rivers State Government N78billion cash as refund for federal projects done by the state.
According to him, the Federal Government merely issued a promissory note, which the bank, was going to discount.
“I didn’t know he (Peterside) does not understand what they call promissory note. N78billion was not backed up by cash by the Federal Government. N78billion was approved by Federal Government, but not in cash. And so, the bank has to come in to take it and discount it, because Federal Government is going to pay them back in the next four years. What Rivers State Government got was N52billion out of N78billion. But, in principle, N78billion was approved, but was there any cash? No cash to back it up.”
Wike said it was disingenuous for Peterside, whom he convincingly defeated in 2015 governorship election, to deny his administration’s glaring infrastructural achievements, such as construction of nine flyovers, schools, hospitals, roads, cassava processing factory, among others.
He disclosed that under the previous administration in which Peterside served as commissioner for works, contractors were compelled to pay bribe, and ironically starved of funds.
According to him, this was why projects like the Rebesi-Trans-Amadi-Elelenwo Road awarded to RCC, was abandoned by the previous government, and he had to complete it.
“We signed an undertaking with them by giving them (RCC) an Irrevocable Payment Standing Order of collecting N1billion every month from us. We paid RCC not less than N17billion to complete that road. It was not awarded by us. It was the previous administration, they awarded the job, and took away their profit and that project was left like that.”
Wike said it was on record that Peterside, who hails from Opobo and was a commissioner for works, failed to complete the Ogoni-Andoni-Opobo Unity Road due to his abysmal performance.
On the contrary, he said that he, who is from Obio/Akpor, has successfully completed the road, and will inaugurate it on Saturday.
He further dared Peterside, who as the DG of NIMASA, the Cabotage Office was relocated from Port Harcourt to Lagos, to declare what the state benefitted during his reign in NIMASA.
Also speaking, Senator Theodore Orji, who performed the flag-off of the Woji-Aleto-Alesa-Refinery Road, commended Wike for running an inclusive government and executing projects that impact positively on the people of Rivers State.
“God specially packaged you to be the governor of Rivers State. And to show them that there is God, whatever you are doing is from the inspiration of God. Don’t relent.”
Orji, who was the immediate past governor of Abia State, described Wike as a solid political rock in the PDP that has remained as terror to the ruling party.
In his remarks, the Special Adviser to the Governor on Special Projects, George-Kelly D. Alabo, said the road would connect Woji-Aleto-Alesa to the East-West Road, and boost economic activities in the affected communities.