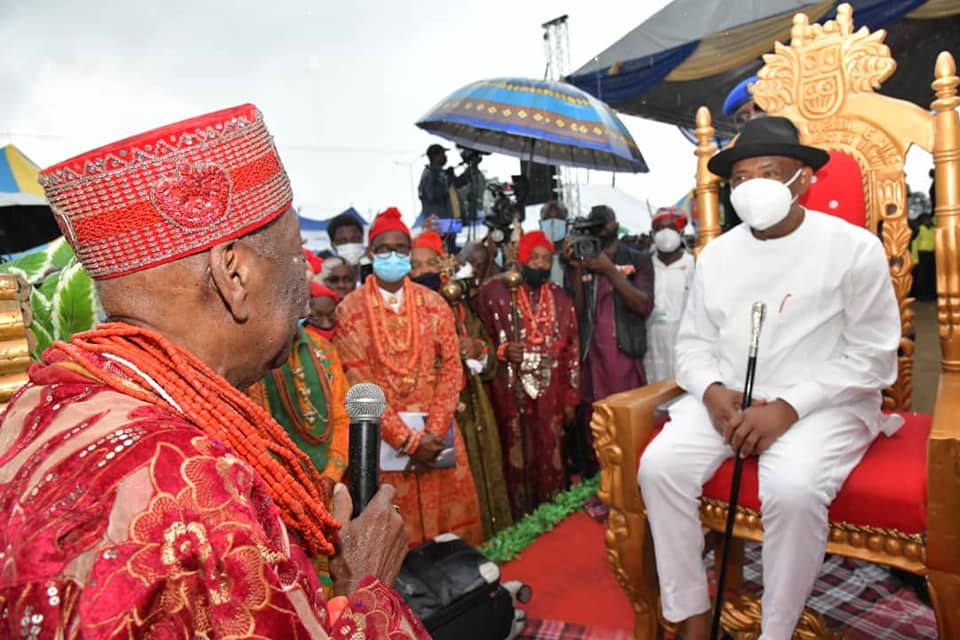 The people of Ogoni Ethnic Nationality has conferred on the Rivers State Governor, Chief Nyesom Wike, with the highly referred chieftaincy title of “ Mene Kwalenu 1 Of Ogoni”. The title when translated in English means a benevolent king.
President of the Supreme Council of Ogoni Traditional Rulers,  His Royal Majesty, King G N K Giniwa, stated this last  Saturday, at Bori, during a grand reception organised by the people of Ogoni in honour of Governor  Wike.
President of Kagote, Hon Emmanuel Deeyah , said the reception was organised in appreciation of the so much benefits Ogoni people got from Governor  Wike’s administration in terms of projects executed in various parts of Ogoni as well as the numerous appointments given to sons and daughters of Ogoni nation.
Governor  Wike expressed appreciation for the huge support his administration had beed enjoying from the Ogoni people and urged leaders in the area to endeavor to fight against cultism and other acts of  criminality. He assured  them of sustained determination of his administration towards more development in Ogoniland.
Also last week, Governor Wike announced that some of the gunmen responsible for the murder of security personnel in the state had been apprehended.
The governor who disclosed the cheering news in a state broadcast last Wednesday said the murderers would face the full wrath of the law.
He further explained that after a review of the prevailing security situation in the state, particularly the effect of the curfew on citizens, the State Security Council decided to relax the curfew time a little for Obio/Akpor and Port Harcourt local government areas as well as the Port Harcourt International Airport.
“ Consequently, the current night time curfew in Port Harcourt and Obio/Akpor local government areas will now be effective from 8:30 p m to 6:00 am from Sunday 16th May 2021, while the starting and closing time-frame of 7.00 pm and 6.00 am still continues in the rest of the state till further notice*, he said.
The governor commended residents of the state for their steadfastness in the midst of the socio-economic discomforts caused by the proactive measures taken by the government to safeguard the state from faceless terrorists.
He urged them to always see security as business of all in the state and to give useful information to the security agencies for their swift actions.
Within the week under review, Governor Wike was among the Southern Givernors who attended a crucial meeting in Asaba, Delta State capital last Tuesday.
Recall that in the said meeting, the Givernors had called for a national dialogue to restructure the country. The governors also resolved that open grazing of cattle be banned across Southern Nigeria.
They also spoke on Apapa gridlock and the need to reactivate activities in other parts of  the country among other issues.
The Rivers State Governor felicitated with Muslims on the successful completion of the Ramadan fast and the celebration of the Eld-el-fitri last week.
In his Sallah goodwill message, Governor  Wike called on all Nigerians to imbibe the lesson of love, justice , fairness, equity, peaceful co-existence with others.
He reiterated the commitment of his administration towards the promotion of religious tolerance and the right environment for the freedom of worship.
Another major event in Brick House last week, was s condolence visit to the Commissioner of Police, Mr Friday Eboka last  Monday.
The governor said that the State Government would give N20 million to the families of esch of the eleven police personnel killed by gunmen during the recent attacks of police formations in the state.
He assured the state police command of the state government continued support to the security agencies in the state.
The Commissioner of Police in the state who represented the Inspector General of Police, Alkali Baba Usman, thanked the Governor thanked the Governor for assuaging the pain of the bereaved families.
By: Chris Oluoh
Related Topics:
Up Next