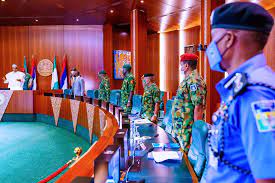 Service chiefs and heads of security agencies would tomorrow, appear before the Senate to brief it on efforts to address the spate of insecurity in the country.

The Senate would be briefed properly on the worsening security situation in the country that appears to threaten the nation’s corporate existence.

Lawan explained that the service chiefs were unable to respond promptly to the invitation by appearing, yesterday due to a security meeting at the Presidential Villa, scheduled to end, today.

He noted that in view of the development, the service chiefs would, therefore, appear before the chamber on Thursday, May 6, 2021.

Lawan said, “They were to come today at 11 am to brief the Senate on the security situation. Today, the National Security Council is continuing its meeting that it started last week. Therefore, the invited security heads will not be able to come for the briefing.

“We are not sure if they will finish their meeting, today. We assume it could spill to Wednesday too.

“Just like it spilt from Thursday to Tuesday. So, to be on the side of caution, we have now fixed the date for the briefing to be Thursday, May 6.

“I want to appeal to all of us, that the briefing we will take from the service chiefs and other security agencies will be very crucial for us to be properly informed, properly guided, and that if there is any request for supplementary budget, we should be able to understand why we should consider and approve such request.

“On Thursday, the only item on the order paper will be the briefing. We will do that as a special day for the engagement, the interaction between the Senate and the service chiefs.”

It would be recalled that the Senate had last week summoned the service chiefs and heads of security agencies to appear before it, yesterday, after the senators had expressed anger, frustration, agony over continued security challenges in the country with attendant armed banditry, killings, rape and kidnapping.

The senators, who spoke one after the other, last week, had lamented the high level of blood-letting across the country, just as they have taken a swipe at the Federal Government over the level of insecurity in the country, saying that there is a lack of leadership and political will which explain why the challenges have continued in Nigeria.

The lawmakers spoke during their contributions to a point of order raised by Senator Muhammad Sani Musa, All Progressives Congress (APC), Niger East.

Musa’s motion is titled, “The activities of bandits and Boko Haram terrorists in Shiroro, Munya and Rafi local government areas of Niger State: And the need to bring an end to the menace.”

Musa, who came under Orders 42 and 52 of Senate Standing Rules, recalled that several efforts had been made on the insecurity situation in the country, and yet nothing had been achieved.